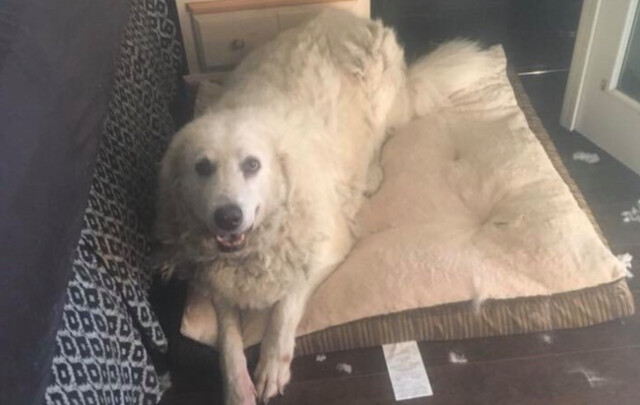 Kamloops resident Amber Hardy noticed things were a bit askew in her car as she and her family headed out for groceries on the weekend.

While most things hadn't been touched, one thing was missing. A silver-coloured vial containing the ashes of family dog Kaycee had been taken.

Upon reviewing footage from their security system, Hardy saw a man rummaging in her car at 4:13 a.m. Saturday. She says from the video footage she thinks he has a heart.

"He almost didn't take them, I think he was pondering," she says, noting that he left at first, before coming back to take the vial. "Maybe he needed to eat."

Hardy says she thinks he might have thought it was real silver and therefore worth something. However, the vial isn't silver, and contains no monetary value except to the Hardys. It's engraved with "Kaycee forever in our hearts" and has a dog paw on a key ring. A similar vial with the ashes of her grandfather was left behind; she theorizes because the chain it's on got stuck.

She reported the theft to Kamloops RCMP and sent them the video footage. Officers recognized the man and had heard he was trying to sell the vial at Northills Mall on the North Shore. However, when they went to the mall to find him, he'd fled, she says.

Now, she worries, the man has tossed the vial and the family will never see it again.

The vial has been in the car for years; Kaycee was put down in 2015. The Hardy's had rescued the big sheepdog a couple years prior from a farm in 100 Mile House. The SPCA had gone up to rescue dogs from the farm, but hadn't been able to get Kaycee. Hardy and her husband decided to go up themselves and were able to find her and bring her south.

When they let the SPCA know they'd found Kaycee and were bringing her back to Kamloops, the SPCA told them they could keep Kaycee if they wanted.

"She was only with us for two and a half years, but boy did we give her the best couple years of her life," Hardy says. "She was the best dog in the world."