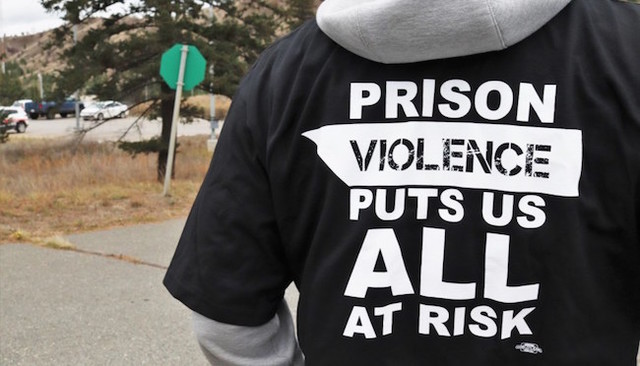 About 50 correctional officers and supporters gathered Thursday outside the Kamloops Regional Correctional Centre to protest the level of workplace violence they face.

So far this year, 14 correctional officers have been assaulted at the prison, according to Dean Purdy, vice-president of corrections and sheriff services at the BC Government and Service Employees' Union.

"(There's) anything from correctional officers being sucker-punched, hit from behind, having feces and urine dumped over their heads, some of the most degrading assaults you can imagine," Purdy says. "Also, pushed, spit on, anything you can think of, that can happen."

A recent incident last month involved a jail guard being sucker-punched. When a second officer came to his aid, the inmate attacked him as well. Both officers are currently recovering.

Bill Neal, a retired correctional officer, was one of those at the protest. He says an assault in 1997 put him off work for a year-and-a-half with a lower leg injury. He eventually went back to work and retired in January.

"I witnessed numerous assaults over the years; just lucky I wasn't involved in any more of them," he says. "It's worse now than what it was."

The issue, Purdy says, is the ratio of prisoners to officers. The current ratio in Kamloops (one of seven maximum-security facilities in B.C.) is 1:40, with one officer working in the same area where 40 prisoners live. That needs to change, he says, by adding a second officer in each of the living units.

Currently, KRCC has about 200 correctional officers. Purdy says they're not looking to double that number, just increase the number so that there could be two officers at all times in the living units.

There was hope that when the Okanagan Correctional Centre opened its doors, it would decrease the violence, as prisoners were spread to more facilities, but Purdy says in the two years since it opened, the violent trend hasn't changed. He says there's also fewer inmates due to the fentanyl crisis.

"With the opioid crisis, we have approximately 200 fewer inmates provincewide because of all the deaths out in society and in the jails."

"(There are) more and more gang-affiliated inmates in the jail, and 60 per cent or more of the inmate population have some form of mental health issues, so we're really the default mental health facilities in this province as well," Purdy says.