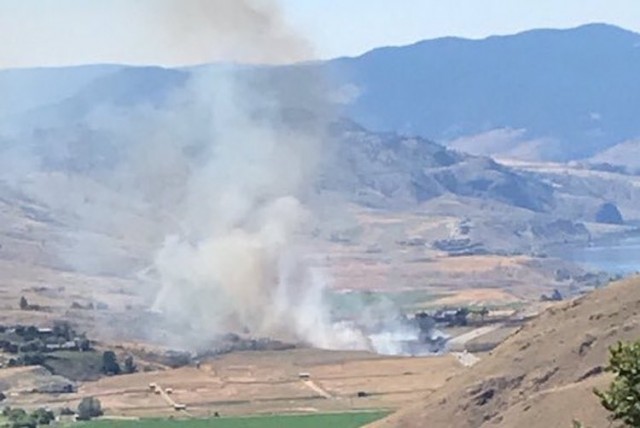 An intense wildfire that was sparked after a collision on the Trans-Canada Highway destroyed a business located at a Cherry Creek home.

Firefighters are continuing to work at the scene of the 15-hectare fire, which is currently considered held.

A crew of 47 firefighters were backed by a helicopter and 11 planes fighting the blaze that broke out Wednesday afternoon following a crash and vehicle fire west of Kamloops.

“Right now, it is still estimated at 15 hectares and the fire is being held. We are looking at a smouldering ground fire right now. It’s very black out here,” said fire information officer Max Birkner.

A house located just off the highway sustained serious damage in the fire. A vehicle parked at the home was also damaged, and an outbuilding was destroyed.

Cherry Creek resident Kelly Sens said the fire destroyed his woodworking shop and smoke damaged his home, but his family and animals are safe.