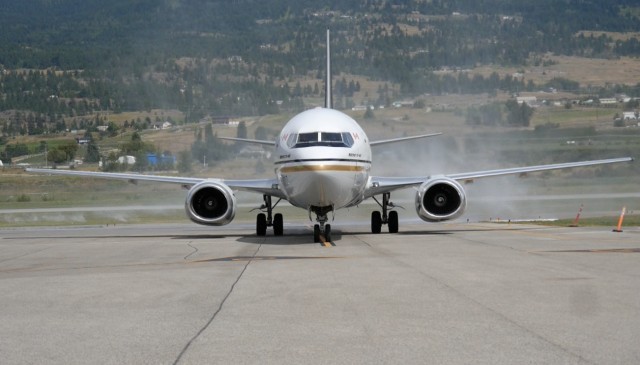 “The response has been way exceeding what we forecast,” Dean Dacko, the chief commercial officer for NewLeaf Travel said Wednesday.

Dacko had just met with Sun Peaks Resort officials to talk about the upcoming ski season and was getting ready to head down to Kelowna, but the company’s immediate focus is on getting the travelling public here used to a new way of flying.

Early indications are it won’t be a problem — the first few flights in and out of Kamloops since NewLeaf launched here July 30 have surpassed the 60 per cent occupancy target.

And, said Dacko, it will only get better — he expects traffic to double over the next year.

The key, he said, is to familiarize Kamloops air travellers with how ultra-low pricing — something this market hasn’t previously seen — works. “It’s actually very simple,” he said of NewLeaf’s add-on pricing system.

Airfares are currently advertised at $79 from Kamloops to Victoria and $99 from Kamloops to Edmonton but depending on the level of service customers need or choose, total cost goes up accordingly. Take luggage, for example. The fees vary according to whether it’s carry-on or checked, and whether you book ahead of time on NewsLeaf’s website or wait till you get to the airport. Booking ahead is cheaper. Additional and overweight bags cost more, and so on.

A seat in the front half of the aircraft will cost you more than one in the back, and a seat in an exit row with more legroom will cost still more. If you want a beverage, snack or a meal on the way, you can buy that at rates competitive with the full-price airlines, but don’t expect a full hot meal, said Dacko.

A one-way trip from Kamloops through Edmonton to Hamilton might cost around $300 when you add the various costs together, considerably cheaper than you'd expect.

The business model calls for traffic to go up and fares to come down.

“We’re about lowering the prices, and what we want is to grow.”

Dacko's experience in the airline industry goes back a long way, including several years as head of marketing for Malaysia Airlines and before that as director of marketing for Air Canada Vacations.

A lot of airlines have tried to come into Kamloops with lower airfares than Air Canada or WestJet but haven’t been able to put enough “bums in seats” as they say in the industry. Some lasted only a few weeks, others a season. What makes Dacko think NewLeaf will be any different?

NewLeaf, he said, will succeed where others have failed because its business model is based on operating costs that fit the low-fare structure, and because it serves a different market than the big guys. It’s not taking business away from them but if they want to compete with NewLeaf head-on on ultra-low fares, “We’re saying bring it on.”

As for ski season, he expects that to bring in a lot of new NewLeaf customers. The winter schedule, which starts Oct. 2, will be announced in a few days. And more flights will be added for the Christmas season.

The aircraft are 737s operated by Flair Airlines of Kelowna on behalf of NewLeaf, which also lands in Kelowna, Saskatoon, Regina, Winnipeg, Moncton and Halifax.  The Kamloops flights operate Wednesdays and Saturdays to Victoria and Edmonton, with easy connections elsewhere, Dacko said.

If you board a NewLeaf flight in Kamloops or Abbotsford right now you might see Canadian North written on the side of the plane because it’s being rented by Flair Air, but NewLeaf’s gold and blue emblem will eventually be painted on all the aircraft.