Is there about to be a change at Prospera Place in Kelowna?

Those in the know tell me that the naming of the building is about to come due again.

The building when it was new was named after a company in Edmonton and the owner had a home here.  Prospera Place, formerly known as Skyreach Place, is a 6,886-seat multi-purpose arena in Kelowna.  It replaced Kelowna Memorial Arena which is still in use for smaller events.

Apparently it is the time for renewal of the rights to name the hockey and entertainment centre currently named Prospera Place. The city currently has an agreement with Prospera Credit Union. The deal I understand is $120,000 a year. I can’t get anyone to return my call so I don’t know exactly what is taking place.

My guess is that the international realtor ReMax may just be the company looking for that type of promotion.

It will be interesting to see what happens. 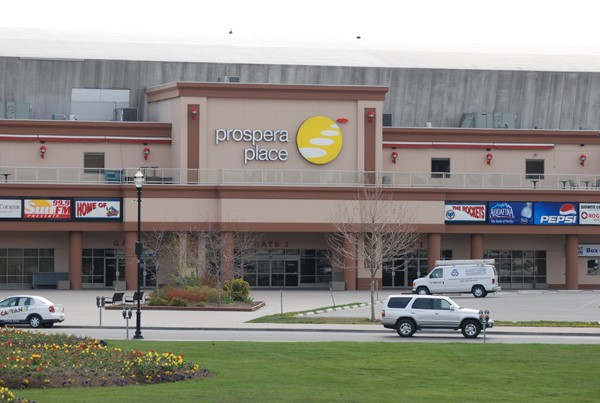 I received two email messages from a reader, both on the same subject. There is lots of questions being asked these days about Costco’s plans for the future in this valley.

Good Morning... Love your articles!
Do you know if it’s true that Costco owns land in the Anderson subdivision in Vernon?
If so are there any plans in the near future to open?
Thanks.

People want Costco close so they can walk to it to do their daily shopping. That is not going to happen in my lifetime. Costco is building ten new stores across the country now. Those are the only plans I have been told about.

I also know for sure that the real estate people for Costco have been in the valley looking at property in both Penticton South and Summerland. Nothing is final.

I honestly don’t know about the Anderson Valley property in Vernon but I will find out.

Here is a good reason to put Edmonton on your travel list. Hooters with the world famous Hooters girls have opened in the West Edmonton Mall. It is the first of four that will open in the city. Justin Bieber dropped by one Saturday night and the house went quiet.

There is a Hooters set for Calgary and another for Vancouver.

Steve Young, former super star with the San Francisco 49ers is still paid $1 million a year on his NFL contract. He signed a contract originally with the team for 40 years and that’s why he is still paid yearly.

It never ceases to amaze me the amount that families spend on Halloween. The experts believe it will amount to at least $70. The costume stores, the department stores and the dollar stores all have a niche in this marketing bonanza. I was thinking back to the days I hit the streets with a pillow case and not much of a costume. During the war years it was not to collect candy, it was to collect money for those bombed out in England. "Shell out for the bombed out". We had a white box with a slit in the top for the money we collected.

I received an email to straighten out my information on City Furniture. It seems that Ray Kondola and Ruby Sharma started City Furniture in Prince George in the 70s. They have operated separately although both list over twenty stores. Ray’s brother and two sons operate Kondola’s furniture stores separately.

Fewer patients suffering brain injuries are being declared "brain dead" thanks to better injury prevention and improved treatments, according to a Canadian study. But one consequence is a declining number of organ donations.

The study, which was published recently in the Canadian Medical Association Journal, surveyed 2,788 patients who had been admitted into hospitals in Calgary, Alberta for brain injuries and found that the percentage of patients succumbing to brain death (i.e., irreversible loss of all brain function) decreased from 8.1% in 2002 to 2.2% in 2010.

There is excitement at SOPA Square on Pandosy Street under the watchful eye of the man in charge, Matt Kenyon of respected Greyback Contracting in Penticton. He has a solid reputation and is employed by the money people from Edmonton. The commercial division will be the first to open as you can see the work being done. The long delayed project is back on track and that is good to see.