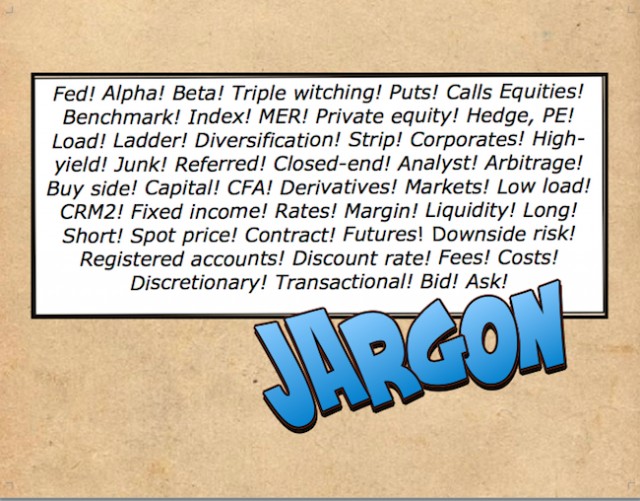 In 1948, Sir Ernest Gowers published a book at the request of His Majesty’s Treasury, entitled, Plain Words. It was to provide bureaucrats with a reference to simplify their complicated ways of stating the obvious, and relying on language that was considered by most to be pompous and elitist.

Every industry has its fair share of jargon. Whether acronyms, form numbers, nicknames, perpetual clichés, or long-winded explanations, there’s no end to the barrage.

The banking and investment industry is near the top of that list for communicating with clients and customers in ways they often don’t understand. Also on that list are computer salespeople, automotive mechanics, and economists.

It isn’t that they’re trying to hide anything, it’s just that it’s easier to talk in a language that’s convenient and comfortable for them, so why bother to change?

Many businesses have started to realize they need to speak in a way that their customers understand - if they want to keep them as customers. The connecting of markets and suppliers around the world has brought virtually every business to our doorstep. The competition is fierce. Companies today must do everything in their power to not only provide customers with what they’re looking for, but also create a memorable experience.

Many advisors and bankers have figured this out, and go out of their way to talk to their clients in straightforward, simple language – not because their clients lack intelligence, but because they have no reason on earth to know the jargon.

These are a few of the common terms most of us in the industry use every day. This doesn’t even begin to tap into the jargon that’s specific to our own companies or particular specialties. Unless you’re in the industry, the majority of this corporate speak (did you see that – I did it myself) is nothing but a distraction and a point of contention for many clients.

So why do advisors continue to do it? I would suggest there are three reasons. First, it’s easy. It’s a business that spends a good deal of time talking. When talking with peers in industry it’s quicker to say CRM2 than it is to say, “the second phase of the Customer Relationship Model legislated by the Investment Industry Regulatory Organization of Canada.” The problem is, when advisors take these shortcuts, clients often don’t know what they’re talking about, or receive incomplete pictures. The second reason is that they think it makes them look smart. The last reason is a simple one, and for most of those in the business is the primary reason we talk the way we do: We actually thought you all understood what we were talking about.

Many of us try to bridge the gap between industry and clients by relying on metaphors and illustrations. We tell stories or create pictures, but often that only goes partway to solving the problem. As clients, the key is to speak up. Too often, when people don’t understand something they remain silent and hope they’ll pick it up later, or that it doesn’t really matter. I can’t count the number of times I’ve sat listening to a computer tech go off while not understanding a word they’ve said until the very end, and even then only a part of it.

At a meeting with clients last week, we were discussing a fairly complex series of transactions they were working through with their lawyer and accountant. They ended up putting a stop to the process because they were uncomfortable. They wanted to thoroughly understand what was going on and to feel confident in the end results. I was impressed with their grasp of what they understood, what they didn’t, and their willingness to not proceed until they felt as though they knew exactly what was transpiring and understood all the details.

It takes two to communicate effectively. If an advisor, technology person or mechanic is dancing around the details with a bunch of jargon that means nothing to you, ask them to explain, in plain words, what it is they’re saying. Don’t be shy. Don’t accept a superficial explanation of the facts, tell them you don’t understand what they’re talking about. If they’re unwilling to do so, you can assume one of two things from their response: Either they don’t care or they don’t know. Either way, it’s probably a good time to consider an alternative.

Don’t settle for half the answer. There are plenty of great advisors and salespeople out there who are willing to take the time to explain things in a way that helps make you comfortable and confident in your decisions.

More It's Your Life articles

Jeff is an advisor and partner with The Navigation Team at Scotia Wealth Management.

He lives in Kelowna with his wife Tanya, their two university bound daughters and their canine kids.

You can contact Jeff by email at [email protected]