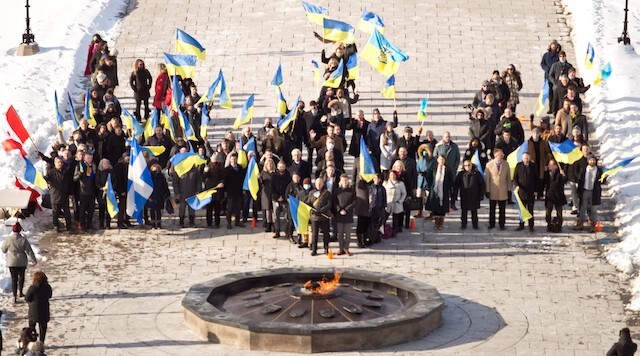 Photo: Contributed
Members of Parliament form a live Tryzub, the Ukrainian coat of arms, at the Centennial Flame in Ottawa.

A little over a week ago, the worst fears of thousands of Ukrainian-Canadian families in Kelowna-Lake Country were realized.

The long-threatened invasion of Ukraine by (Russian President) Vladimir Putin's despotic government became a reality as Russian military forces crossed Ukrainian borders. This aggression is by the Russian regime, not the Russian people, many of whom have risen in opposition.

The Russian government's unprovoked decision to invade Ukraine is now the most severe threat to global peace and security we've seen since the Second World War.

Being of Ukrainian descent myself, I was shocked by this sudden turn of events, as I'm sure most residents here in Kelowna-Lake Country are.

The actions of the Canadian government to financially penalize with severe sanctions available are greatly supported and consistent with our allies. Isolating the Russian government's access to financial markets and Russian politicians and oligarchs from their wealth provides much-needed pressure for peace.

Conservatives have also recommended that Canada seek to remove Russia from international partnerships like the G20 and the Organization for Security and Co-operation in Europe. We also believe it is crucial to send a strong message to Russia by recalling Canada’s ambassador in Moscow and expelling the Russian ambassador from Ottawa.

Conservatives have always taken a strong stand against Putin’s militarism and we must ensure we continue to press him where it hurts the most - his pride, ego and wallet.

I want to thank our local Ukrainian community leaders for its strength over the past days and its help in keeping me up to date on what they are hearing from the ground in Ukraine.

I have been able to pass on critical information on what’s needed on the ground to those responsible in government, based on what our own community leaders are hearing.

On Feb. 28 in the House of Commons, I was able to participate in a late-evening “Take Note” debate. I asked the government about ensuring Ukrainians fleeing violence can travel to Canada without requiring an onerous visa or at least streamlining the process.

I again want to thank the Ukrainian community here in Kelowna-Lake Country for sharing concerns about visa requirements, so I could ask the government about the potential to take action on it.

The following day, a motion on Ukrainian visas was brought before the Immigration committee. While it was (supported) by the Conservative and other opposition MPs, Liberal MPs chose to vote against it.

As we've seen at marches and rallies here locally and nationwide, Canadians understand that by standing up for the protection of Ukrainian peace and democracy, we stand for its protection here in Canada as well. I was proud to join a gathering in front of the Centennial Flame in Ottawa this week, to join other Parliamentarians in expressing our support for the people of Ukraine.

This invasion has brought national and international security conversations to the forefront. In recent years, Canada has become familiar with Putin’s interest in the Arctic and Russia’s excursions into Arctic waters. That’s why it’s critically important that in the weeks and months ahead, Canada begin to take real action to protect our Arctic and secure our waters.

We must also support our European allies seeking to end their energy dependency on Russian natural gas with increased exports of Canadian energy through new tidewater pipelines.

Russia also provides North America with crude oil and petroleum products, and we should instead fully use Canada’s energy capacity with our neighbours in North America.

Some of the organizations involved in humanitarian aid to Ukraine include the Canadian Red Cross, the Ukrainian Canadian Congress and the Canada-Ukraine Foundation.