Home treatments for the flu 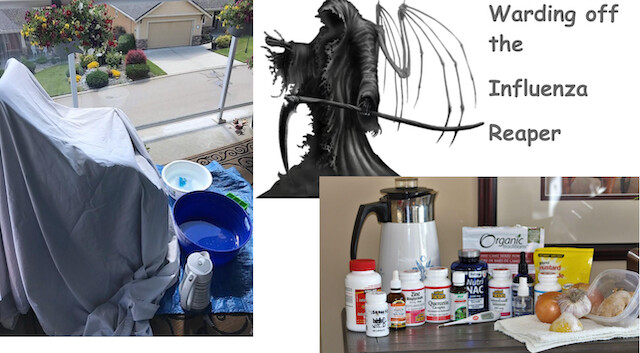 My life force was ripped from my body and caught it up in an invisible tornado, which made my head spin and legs turn into spaghetti.

Collapsing onto the bed, I waited for the inevitable. The phone brought me back to the land of the living. It was my friend Morningstar and she wept at the sound of my voice, asking if I felt like I was going to die.

“Whaaat? Uhhh, I dunno, maybe,” I replied. She begged me not to leave her, which made me realize the gravity of my situation.

“Don’t go, promise me you won’t” she shrieked.

It compelled me to fight back against an illness that wanted me dead.

“Stay awake or you’ll die, I told myself.” I dragged my butt out of bed and encouraged my husband to do the same.

“It’s not good to lie down so much. Fluid will build up in our lungs and we’ll end up with phenomena. Get up and let’s have some homeopathic meds and another onion poultice.”

We used various tried and true, ancient folk remedies, including mustard plasters which work on a variety of lung ailments. Mustard promotes increased blood circulation to the skin surface and opens up the respiratory tract. The phlegm loosens up and helps prevent chest congestion from getting worse. Seeing a doctor wasn’t always possible back then, so the mighty mustard plaster saved many people.

Along with the plasters and poultices applied to our chests, we also took the following vitamins, minerals supplements, including H20 as a healing modality:

We employed these life-saving measures and pulled through without long-term side effects. Initially, I was skeptical, but desperate enough to try anything. Our church family popped by with these products, along with casseroles and soups of various kinds. Their kindness, generosity and prayers spurred us on.

However, during that first night of illness, I awoke at three a.m. and wrote my children a goodbye letter just in case. I addressed them all in the same document, acknowledging my failures to them individually and my deepest regrets.

Even though they’d forgiven me long ago, I still felt guilty. This time was different. I had the clarity only the dying could have. Nonetheless, I didn’t mail it for a couple months until I was well again. I didn’t want to alarm them unnecessarily.

More than a year later, I realized I no longer carried that crushing weight of self reproach. What peace of mind I received.

I’ve had several life-threatening accidents, illnesses and injuries that were brutal, but this respiratory infection took the cake. While, at the time, I told myself I survived worse, I was worried the “grim reaper” would be victorious.

In a creepy twist of fate, I’d written a fictional story about having a date with the “dark angel,” and then was struck with the disease the next day. Was it a coincidence? Or had I been toying with an evil force and nearly paid the ultimate price? There are powers and principalities in the unseen realms with which we mere mortals should not engage. I learned my lesson.

Knowledge is power, but in spite of that, I had got sick again eight months later. But I knew the drill and fought it off with the same protocol.

I have had brushes with death before and warded off Mr. Reaper. So you’ll just have to wait, oh angel of death, God’s more powerful than you are and He’s not done with me yet.

(The information published here is no substitute for professional advice from a doctor or pharmacist.)