Serpents of the deep 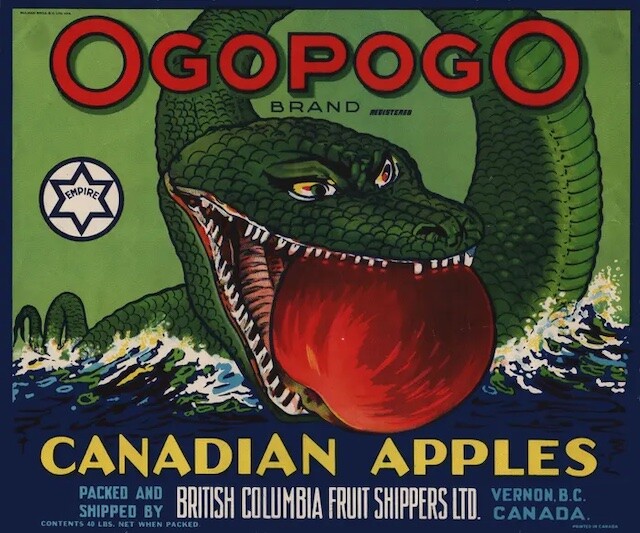 Photo: Contributed
Okanagan Lake's famed mythical monster Ogopogo has been depicted in many ways and in many places over the years, including by a company selling apples, on the labels of its boxes.

The beast appeared through the fog, its eyes glowed yellow as the sun.

Fire blasted from its mouth, which heated the sea. Smoke billowed out of his nostrils, blackening the skies. As Leviathan swam, the water churned like a boiling cauldron.

It looked like a dragon with the body of a snake, and it slithered effortlessly through the depths. Its spiky scaled skin was impenetrable armour, no arrow or spear could pierce the hide or belly. This brute was the T. rex of the ocean. Leviathan had huge interlocking teeth from which no prey could escape.

Armies equipped with primitive weapons might as well have been throwing toothpicks at it. Iron bars couldn’t hold it because it snapped the metal like rotten wood. It craved live human flesh. Those lucky enough to flee went insane or dropped dead of a heart attack.

Leviathan was a primordial sea monster recorded in several places in the Bible, including the book of Job 41: 1-34. The gory scene took place in the Mediterranean Sea during the 6th Century B.C.

Along with Leviathan was a creature called Behemoth, which resembled a sauropod dinosaur and lived in the marshes. (Job 40:18) The Behemoth’s tail stood high as a cedar tree, and when tromping on dry land, its enormous appendage left massive ruts.

In Ontario’s Lake Superior, a dinosaur lurks. Her name is Mishipeshu, nick-named Mishi, who made the water churn as a boiling pot and she tipped over boats. The famed Edmund Fitzgerald (popularized in a song by singer Gordon Lightfoot) is one of the vessels she allegedly capsized.

Mishi, an armoured amphibian, had pointed scales on its body. She once walked on land, leaving cavernous trenches behind her. The Algonquian people immortalized her by creating a petroglyph of Mishipeshu on a rock face. The painting is century’s old, pre-dating Columbus. Mishi’s portrait features the head of a lynx or panther and the body of a viper.

Our very own Okanagan Lake is said to have a giant serpent that occasionally surfaces too. Its name is Ogopogo, or Nx?a?x??itk? (NN-Ha-Ha-Teek).

“Eyewitness” accounts state the critter is a 15-meter-long black or green snake, with five curves on its back and a horse shaped head. The cryptid (an animal not proven to exist) makes strange whooshing sounds while swimming towards onlookers.

On Oct.19, Colleen and Dale Hanchar photographed a peculiar image while out boating on Okanagan Lake. It looked like it had a wolf’s head with knobby horns for ears. Cryptozoologist Adam Benedict said that it was probably an enormous bird. Perhaps it was a wooden carving tossed in the water.

Whereas there’s no scientific evidence to prove Ogopogo, or any other sea monster, is authentic, many indigenous people acknowledge and believe N'ha-a-I,tk is real, along with others who claim to have seen him.

The creature is a lake spirit that links local First Nation people to their land and water and protects the valley. They believe the mysterious aquatic entity comes from another dimension and it is an honour to see it.

Some say there are many living fossils haunting Canadian lakes including:

Since antediluvian times, there has been documentation of hundreds of water-dwelling monsters around the globe. Notably, one that resembles Mishi is the Bunyip of Australia. Several Australian Indigenous people described their local man-eating mermonster as having the head of a black panther with a snake’s body. The word Bunyip means evil spirit.

While most sea monsters are elusive, camera shy and benign, a few of them were bloodthirsty ogres.

I am grateful that Ogopogo is primarily a gentle soul, without a hankering for human hors d’oeuvres.

It isn’t one to trifle with, however. According to the book The Kelowna Story, an Okanagan History, there was a man called Chief Timbasket who scoffed at the legend and soon thereafter disappeared.

Searchers found his canoe empty and up a mountainside. No wave could have tossed it that far onto land.

It is believed the chief and his family were sucked under the waves in a violent storm and vanished.

So keep your cell phone handy, and be respectful, as who knows what strange beasts lurk in our local waters and forests and are just waiting to greet you.