Casting off the dunce cap 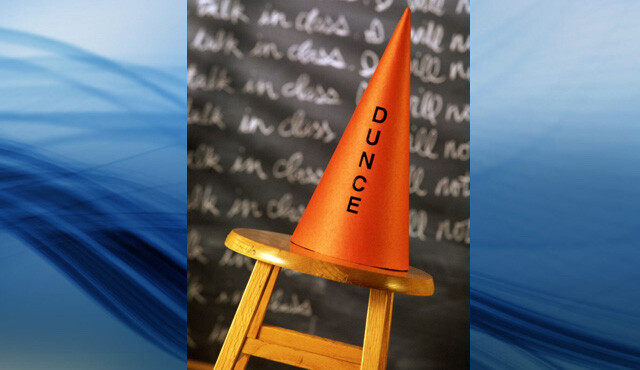 I hung my head in shame as they sneered and snickered while I shuffled past them, headed down the hallway to the dummy classroom.

It felt like the death march for my morale. At the tender age of 10, I was completely devastated.

That memory was laying in wait when I clicked on a documentary called Subnormal, A British Scandal, produced by the BBC in 2021. The program resurrected some ghosts, reminding me of my childhood nightmare of an education.

Although I wasn’t a victim of racism, like the ones featured in the film, I was a casualty of the same type of learning system; having parallel experiences with what the mostly black children suffered in England. We hailed from different continents but came from the bleak era of the 1960s and 1970s.

They labeled those children as being educationally subnormal. Nothing could’ve been further from the truth, as the immigration process had traumatized the kids. When their parents went to England, they left the little ones behind. They worked hard to earn enough money to send for their sons and daughters. By the time the children arrived, the families were strangers. The youngsters had to cope with being uprooted and sent to a foreign land.

Life emotionally scarred me too, and it was getting worse. My peers and I sat around making paper dolls and cardboard houses. The instructor did not teach regular schoolwork, reading, writing, and arithmetic. The powers that be believed we were too simple to do much in life, and a standard education was a waste. The best-case scenario was for me to be a hairdresser and the boys to learn a trade, or become labourers if that was too challenging.

My mother went to bat for me when they wanted to ship me off to a “special” school in Calgary. She saw how dejected I was. Back to regular school for me, but not before serious damage was done.

Sadly, I lived up to their low expectations, and a few of us turned it into a competition to see who could get the lowest marks.

I’d been drowning in the classroom for several years, with no teacher to throw me a life preserver. My brain had frozen over and I couldn’t answer the simplest questions, or perform meagre tasks. I became the joke of the school, “Duh, duh, Doreeeeen,” the other children taunted. Snapping out of my stupor, I responded with a left hook.

When I reached my early teens, I realized I shouldn’t behave that way, as the boys had become stronger than me. No longer being able to cope, I turned to alcohol and cigarettes, as I couldn’t stand the skin I lived in. Life went downhill from there.

Hope springs eternal, however, and thus was my case.

Years later, a friend recommended I enrol at university for a semester. I excelled in the psychology courses I took as a mature student and soon went to college and participated in an IQ test.

It was a gut punch when the psychologist diagnosed me with a low score. He gave me a poor prognosis for my education and career goals. I’d recently left an abusive marriage and was in shock. I did not know the repercussions of trauma until I went to a workshop decades later, where the experts explained how it affected learning.

A child cannot learn if they are in a hyper vigilant state, just trying to survive each day as it comes.

Apparently there are many people with anger management problems that don’t realize their temper outbursts are from anxiety, according to Jody Whiteley, who has a blog called Hope and Giggles.

Whiteley thinks there are five F's as a trauma response—fight, flight, freeze, feed and fornicate.

Whereas the first three are self explanatory, the last two, feed and fornicate, aren’t obvious.

When our Neolithic ancestors had to hunt and gather, they sometimes went hungry. Therefore it was a good idea to gorge oneself when there was plenty of food. Likewise, it was beneficial to mate. Sometimes they'd kill to get the privilege of passing on their genes. Having sex was the best way to ensure survival.

The amygdala part of the brain still activates our survival impulses today. However, it may leave a person bewildered and ashamed afterwards.

“Remember, you are in charge now.” said Whiteley. “Sit, stand and walk like a confident person. It sends a message to yourself (that) you've got this. It takes time and patience to retrain an anxiety response. Think of yourself as a loving parent to yourself.”

I hope the education system has learned to love children enough to drop the labels and work through the children's pain while casting off the proverbial dunce cap.