The harsh impact of homelessness

Looking for a place to live 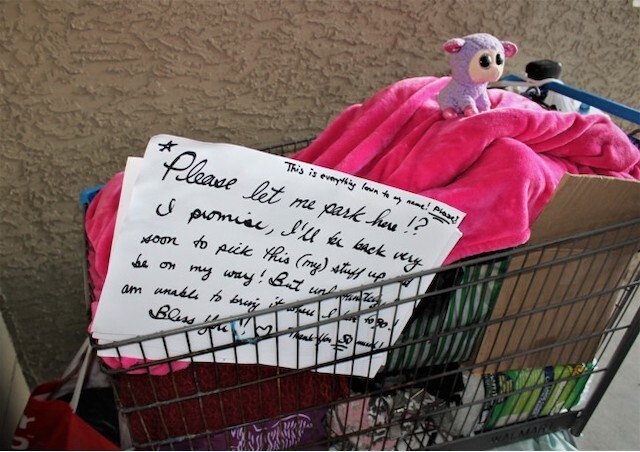 “This is all I have left to my name. Please don’t move it. I’ll be back soon to pick it up. Bless you and thanks so much” the homeless woman penned beautifully on a poster stuck inside her shopping cart.

She meticulously decorated and organized her buggy and tucked it around the corner from the church entrance.

It grieved me to see that as I snapped the picture but I was glad the congregation honoured her wishes. As promised, she returned for it the next day. I can only imagine the horrors she faces daily, especially at night out in the elements where she would likely be mugged and raped by ruthless scoundrels. Perhaps she will end up being trafficked, I mused sadly. The streets aren’t safe for pets, let alone humans.

I wondered how she ended up destitute, with a few meagre possessions.

Many people are only one pay cheque away from being in that appalling situation. It's out of their control—not by choice or being lazy. People can also become displaced due to war, mental illness or a tyrannical government.

Homelessness is nothing new in Kelowna. What is now Waterfront Park was once a tent city in the late 1800s. The men living there were romantically dubbed “footloose bachelors with a carefree lifestyle.” The fellows bathed in the lake. In the winter and built shacks to reside in on empty lots, according to The Kelowna Story, an Okanagan History, by Sharron J. Simpson.

Allegedly, a young German girl, aged 10, died from living in one such hovel because the air quality was putrid.

Personally, I've stayed in a women’s shelter in Alberta twice and know the feeling of not having a home. The first time was when I fled with my three young children and five dollars to my name. It was 1988 and although it worked out—we got a place to live in after escaping my abusive marriage—the housing was shoddy.

It was awful to reside in several ghetto neighbourhoods and I continued to fear for our safety. My first apartment was broken into repeatedly but nothing was stolen or disturbed. Therefore, the police concluded I had an enemy who was messing with me. The adversary wasn’t my ex though and it perplexed me initially but I figured out later who the likely suspects were. But there was no way to prove it, so I moved my family to a different scummy rental.

History repeated itself a decade later when I found myself in yet another predicament and I leased an old Victorian-style home built in 1911. I called it the “crack house,” as that was what it was with prior renters.

There were mice in the walls that scratched around at night and cockroaches scurried for cover in the basement when I turned on the light to do laundry. The slumlord told me to get a cat when I complained about the infestation. I replied, “My daughter is allergic to cats, so nice try.”

I reported the place and moved out after the same child caught pneumonia from living there. She was dangerously close to ending up like the German girl.

Having lived in abject poverty myself, I have empathy for the plight of the homeless and those living in squalor. It’s a frustrating kick in the pants when I am powerless to assist those in need.

The residents of one place I know of are afraid to report the deplorable conditions to the authorities for fears of ending up on the streets if they do.

It is a conundrum, as all the government agencies responsible for housing complaints can’t support me in my fight for them unless I find a tenant willing to come forward. My emails to consumer watchdog organizations/media go ignored.

While dealing with management, I get a song and dance about how the frail elderly tenants must buy and install their own A/C, for example. They make up lame excuses for the other problems with the building. They are working on it but nothing substantial gets done.

The occupants can barely afford their low-income housing as is, and it’s a stretch to put food on the table. They endure black mold, a rotten roof and mice in the walls, filthy hallway floors and broken toilets. Some flush with a bucket of water each time. The stench of urine assails their lungs with every breath as they walk through the place. They live worse than most animals.

I would love some suggestions on how to get help for these vulnerable persons, whose voices are stifled.