Beware of ticks when walking in the woods

Dangers of ticks to pets 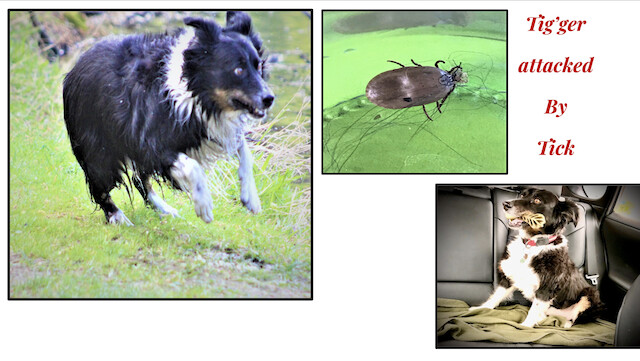 Photo: Contributed
Tig'ger the dog had a run-in with a tick while splashing around in a puddle out on a trail.

“Ouch, something bit me!” Tig’ger howled.

“Mom, Dad, it’s behind my shoulder and I can’t pull it out with my teeth. Help me,” the dog yelped in its own canine language.

They rubbed Tig’ger’s head as they looked down at the dog.

“But that’s not what hurts,” the dog whined. “To the left, try a little lower, please.”

However the humans didn’t understand.

The dog was having fun splashing around in a mud puddle on Kettle Valley Rail Trail. When it happened.

“Oh boy, oh boy, oh boy, it was refreshing to get my paws and tummy wet until some mean critter bit me,” thought the dog. The bug was the size of a poppy seed and it used a tree branch as a ladder to crawl onto the dog’s back and then sunk in its fangs.

It took a week before Doreen found the pest and called Len to remove it. Len used a needle-nosed pair of pliers to pull the tick straight out and then dropped it into a jar.

Tig’ger could hear the female tick screaming as she was being torn from her body. The ditzy dame protested saying: “Just because I’m a parasite, that’s no way to treat a lady.”

The insect’s protests went unheard by Doreen, as she took a picture of the creepy crawly and emailed the photo to a pest control specialist to identify. There is also a website called www.etick.ca that can help.

It turned out it was a deer tick, which sometimes carries Lyme disease. The illness is very dangerous to humans but not as harmful to animals.

This one gorged herself on the dog’s blood for more than a week and it swelled up like a balloon, about the size of a sunflower seed.

Doreen put her hand on the dog and prayed it would be healthy again. She whisked Tig’ger and the now dead tick to the vet where blood tests were done to see if the dog got any infection from it. Doreen and Len were worried, but they had to wait a few days for the results.

Meanwhile, Tigger was vaccinated against rabies, distemper and parvo.

“Owie, owie, owieeeee”, the dog whined as the vet poked it with yet another needle.

They all went home, and Tigger was so tired from the ordeal a nap was in order. Doreen gave the dog a de-wormer pill the next day and it spat it out and ate the yummy pill pocket that hid the medicine instead.Doreen had to buy more pills from the vet.

She ground up the tablet until it looked like icing sugar and put it in another yummy pill pocket. Tig’gerI took it in its front teeth and gave it a gentle shake to knock the powder out. Doreen took it away and stirred up the medicine in some soft cat food mixed with the dog’s kibble. That was gobbled it down and the bowl licked clean!.

It turned out that the deer tick didn’t carry any diseases.

“I was very blessed,” thought Tig’ger. “If I’d been infected, I would’ve developed a fever, no appetite, dark urine and my eyes and gums would have been yellow-looking. It would have been bad. The tick could’ve puked up her stomach contents as she was being pulled out if Dad had squeezed her too hard. Then toxins released into my bloodstream would have caused my blood to not clot properly as it attacked the platelets.”

Some tick can also grow a skin over top of them when they burrow under an animal’s or person’s skin. No antibiotic can penetrate that to kill the tick. Illness resulting from a tick bite may not show up for decades.

Some of the diseases you can get from a tick bite include Anaplasmosis, Babesiosis, Lyme Disease and Rocky Mountain Spotted Fever.

There were more ticks in B.C. in 2021 because of the hot, dry weather. They now live in places where ticks are normally not seen, but are most often found in the woods and in tall grass.

Humans can protect themselves by wearing long pants tucked into your socks, which may look goofy but will save you from a bite. People are also advised to wear hats and light coloured clothing so they can see the tick when it is crawling on them.

Experts recommend buying an insect repellent for humans and dogs, but it’s important to get a product from the vet for pets, as it is a pesticide. There are also homeopathic concoctions available.

In February 2022, Doreen and Len were shocked to find another deer tick on Tig’ger. Len quickly removed it and all was well.