Fighting with our feathered friends is for the birds 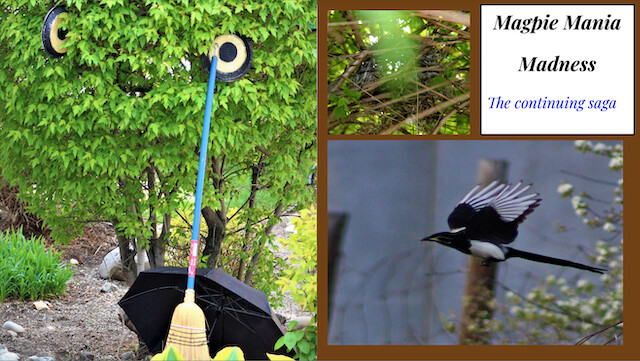 “Na na na na na”, the magpies taunted from the bushes, as Doreen lethargically reached for her morning cup of Joe.

"Eye balls, schmyballs! You don’t fool us, chattered Anges and Antonio. The pair flapped their wings. “Do ya think we’re suckers?”

“If you two hadn’t been beaking off, I would’ve been unaware of your nest”, Doreen retorted. She stomped out the door, armed with an umbrella in one hand and a broom in the other. It was too awkward to remove the nest, so she carefully set aside the parasol. “Mary Poppins I’m not,” Doreen chuckled. “No, you’re Broom Hilda” Antonio cawed.

“That’s it you two, the nest is coming down” she yelled, while shaking the brush at the avian intruders. Now she was vulnerable without the umbrella for protection against the dive bombing feathered fanatics.

In five minutes, the nursery of twigs and soft grass was in shambles. The mossy materials made her sneeze. Foiled again, the magpie couple could only clack their beaks in disapproval. The three were thankful, however, that Agnes hadn’t laid eggs.

Those particular birds have a high IQ. They are tenacious creatures, with the motto 'Never surrender, never give up.” The battle for the bush carried on into its second month.

“In Scandinavian culture, nesting magpies are good luck,” argued Antonio. Doreen replied, “I’m not Scandinavian, but I am of Irish, Scottish and German descent, so nice try.”

Unfazed, Antonio told her that in both the German and Celtic cultures, Magpies bring merriment to a marriage. Doreen, however, remained unimpressed.

“In Pouton, France they worship us, because we warned the humans when the wolves approached, drawled Agnes. And they hang gifts in the trees for us, unlike you, who tries to scare us off with fake owl eyeballs.”

“In Mongolia, they believe we control the weather. So you better watch out or we’ll send a lightning bolt your way,” threatened Antonio.

“In Britain we’re supposed to take off our hats and bow to the bird-brains saying “good morning or afternoon Mr. and Mrs. Magpie. How's Mrs. and the chicks?” You are to spit three times over your shoulder and flap your arms while cawing too. Hopefully not all at once or you'll slobber all over yourself,” guffawed Doreen.

“Also,I'd receive a wellness check, compliments of the RCMP should I perform this bizarre ritual. Scotland Yard is another story!"

Doreen had read about various cultural ideas about the magpie on the Internet and Agnes and Antonio were also impressed her with their knowledge. Perhaps they’d been looking over her shoulder on her computer.

“The Scots believe there’s a drop of the devil's blood in your veins, and I believe it,” cried Doreen.

“Nonsense” squawked Agnes and Antonio. “We embody good and evil, light and dark, just as our colour suggests. Individually, we choose which side to be on, just as you humans do. Besides, there’s good and bad in every creature. Although in Australia they see us as aggressive, merciless hunters.

Italians assume we are crooks, as an opera semiseria named Gioachino Rossini wrote in the tragicomic entitled La gazza ladra, (meaning thieving magpie) which premiered in 1817.

Greeks believe magpies are drunk all the time because one of their deities called Bacchus, the god of wine, enjoyed chumming with us.

Roman Catholic mythology stated we were unsympathetic to Jesus on the Cross, and instead mocked him.

In Leviticus 11: 13-19 in the new King James version of the Bible, it states we are unfit for human consumption. “It’s true, we dine on road kill and in centuries past scavenged upon soldier cadavers. You are what you eat and we’re glad we're not on the human menu.”

“Some First Nations of North America think more kindly of us,” retorted Agnes. “We have shamanistic qualities, traversing to other realms as spiritual warriors. We are healers who enable others to find their inner strength, while our songs will relax and cure whatever ails the enlightened listener.

“Others say that when we tap on a window with our beaks, we’re letting you know there’s something wrong with your house. But you, humanoid, do the rapping from the inside and hammer on the window like a banshee.”

A woeful Antonio added, "Alas, you left us homeless again, so off we go to find other digs. Or just maybe we’ll wait a few days and try try again! Muahaha!"