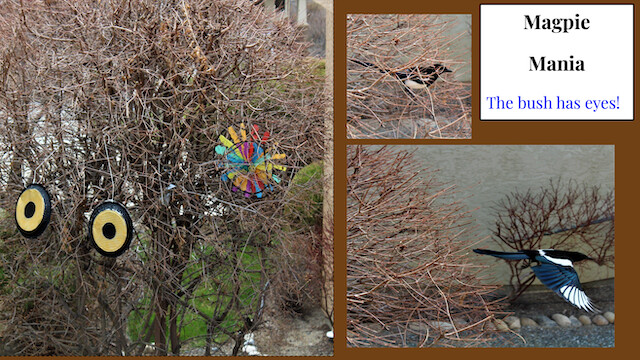 “Home wrecker, get away from our nest! Get lost, you brute. I say, I say, get away! My feathers have never been so ruffled Antonio. How dare those humans undo our handy work” cried Agnes.

Try as she might, Momma magpie couldn’t convince the two-legged beast to let them build their home in peace. Agnes and Antonio hurled insults from the nearby tree top, but the dummkoph didn’t respond right away.

Although magpies have 33 different calls, all Len heard was "wock, wock wock-a-wock, wock, pjur, weer, weer.". He laughed and said “I don’t speak magpie, Excuuuuse me for living. Blah blah blah, to you too.”

Antonio and Agnes flew frantically back and forth, dive bombing the intruder, but to no avail.

“We’ll call for reinforcements, Dude, if you don’t slowly back up and drop the twigs,” yelled Agnes.

Len left when the nest was in shambles on the ground, but not before dusting off his hands. The gesture sent them into a tizzy.

In the past, Len’s forearms and hands had been chewed up by the sharp branches while reaching in to pull out sticks. He looked as though he’d wrestled a feral cat. The blood-soaked scratches gave the birds some satisfaction. However, Doreen came up with a solution. She found a corn broom, which had a hook on the end.

When Len arrived home, he asked, “Wassup with the broom in the entrance?”

Doreen sarcastically replied, “I plan on taking it for a spin after dinner”. Wanna join me?"

The magpies couldn’t believe their ears.

“Now she’s going on an aerial assault. Oh, my! We’re in trouble now!” they quaked.

“It was bad enough when she put pie plates and a rainbow coloured pinwheel in the bush to dissuade us,” Antonio remarked. “The loco dame didn’t realize we loved the décor”.

“The shiny aluminum made a great mirror and the colourful windmill was totally psychedelic.” Agnes chimed in.

They persisted in their battle for the bush. Both species staked their claim on the shrubbery.

“We’re not squatters. Our ancestors have been here longer than yours,” Antonio tweeted. Len ignored their taunts and didn't leave until he destroyed the nest.

Day after day, both parties repeated the process. The magpies awoke before dawn and stealthfully re-constructed their home. But, alas, the feathered fiends couldn’t keep their beaks shut. They kept bragging to their buddies and got into squabbles with each other. Doreen would hear them and bang on the window, which sent the birds into flight and the dog running for cover.

It was a short-term solution, however. They’d return momentarily and carry on where they left off.

Len, their human nemeses, deconstructed their habitat at night. The hook made short work of the nest before they laid eggs.

“Boo hoo, so our relatives ate your precious barn swallow chicks. That’s no reason to deprive us of our nesting site,” Antonio argued. “Swallow tartare is a delicacy”, snickered Agnes.

Doreen had enough of their shenanigans and painted some eagle eyes on both sides of the tin plates, then hung them back in the tree. When the wind picked up, the aluminum dishes would flip around and point upwards, staring blankly into the skies.

The giant eyeballs freaked out Antonio and Agnes, along with other wildlife, including the human variety. The tree looked possessed.

Word got out amongst the critters to avoid that yard, as the bush had grown eyes.

“No matter where you go, they watch you. Before you know it, the monstrous brush will sport fangs, devouring us,” shrieked Agnes.

The crowd of black and white birds gasped in horror and clacked in unison with their disapproval. The high-pitched calls warned others of the danger.

A defeated Antonio told his wife Agnes, “I say we get while the getting’s good, and look for another tree to call home for our youngsters.”

Agnes, the firebrand, was all squawked out and reluctantly agreed.

They packed up their twigs and set off into the sunset in search of greener, eye-free pastures.