Dark tales from the dental chair 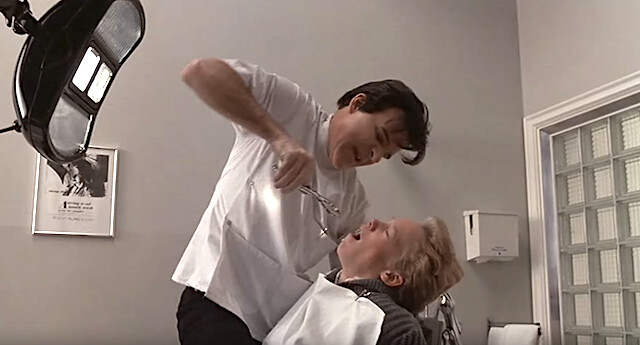 While spitting blood, I cussed at the smirking dentist. He had just pulled a wisdom tooth with no freezing or sedation.

I’ll admit that I lacked wisdom by partying the night before and showed up for my dental appointment reeking of alcohol and cigarettes. Rather than him re-booking my session with a stern reprimand, he taught me a lesson instead.

Afterwards, the doctor had the audacity to ask if I wanted the other teeth pulled. I threatened to kill him if he tried. The year was 1990. I was living on the edge of a dental chair.

The guy reminded me of actor Steve Martin, aka Orin Scrivello, D.D.S. in the 1986 rock musical Little Shop of Horrors. He practically knelt on my chest to rip the tooth out and almost broke my jaw.

The doc was the leader of the plaque alright, and I could’ve sworn I heard him say, “When I start extracting those molars, girls, you’ll be screaming like holy rollers.”

Instead, he looked at me with an evil gleam in his eye, and with a cackle, he spun around and walked away. I retorted with a non-lady-like remark and gesture.

After that awful experience, I didn’t see another dentist for 10 years when my remaining wisdom teeth started giving me grief. This time, however, I was sober and chose sedation dentistry. I was off to la la land and in no time awoke when it was over.

My friend Faron helped me to the car and drove me home. I spent several days eating milk shakes with a spoon and other pureed foods. My chipmunk cheeks needed time to shrink.

I didn’t overcome my dental phobia, though. A few years later, a widow maker tree fell on my head, which chipped several teeth, and that accident brought me back into the office. My front teeth were jagged and razor sharp.

Once again, they gave me a mild tranquilizer, x-rayed and then filled my teeth. Feeling more confident, I went back for a cleaning.

Not seeing a dentist regularly can cause other health problems. Such was my case, as I didn’t go again until I had a severe toothache. I underwent a root canal followed by the tooth removal because I didn’t get it capped. I repeated the same experience a few years later.

This time, I took a prescribed opiate at home an hour before the procedure. I recall staggering onto the treatment chair and then waking up in our TV room in the basement.

My friend Charlene said on the drive back to my place, I was hanging out the passenger window in rush hour traffic yelling “Wooo Woo, let’s party”! A kill switch went off in my head and I passed out in a heap on the floor of the car. The care aide had one heck of a time retrieving me from the vehicle. Thinking she’d need the fire department's Jaws of Life.

The party animal’s alter-ego reared her wild head once again as I bounced onto the ground. It was a challenge for Charlene to get my loose limbed body into the house.

I’m relieved that the evil tooth fairy from days gone by didn't appear as a hallucination. Otherwise, Charlene may have been in trouble.

It bewildered me when I awoke in the cool basement and wondered what happened. Charlene gave me the lowdown on the phone the next day.

After 32 years, I’m finally at a place where I can go to the dentist regularly without sedation or high anxiety levels. The staff is terrific at Kelowna Dental Centre. They play soft music which eases my troubled spirit, and they’re gentle in their approach. All the while, they explain step by step every procedure.

Along with their conscientiousness, I have to remind myself constantly to breathe and relax, and it all goes well.

There's a part of me that has waited for the other shoe to drop, I must admit.

My ears carefully listen for Steve Martin's voice after I complain, "It hurts. I'm not numb.” To which Dr. Scrivello replies, "Oh, shut up. Open wide, here I come! I am your dentist. Say ahhhh. Say ahhhh. Say ahhrrrrr. Now spit!”