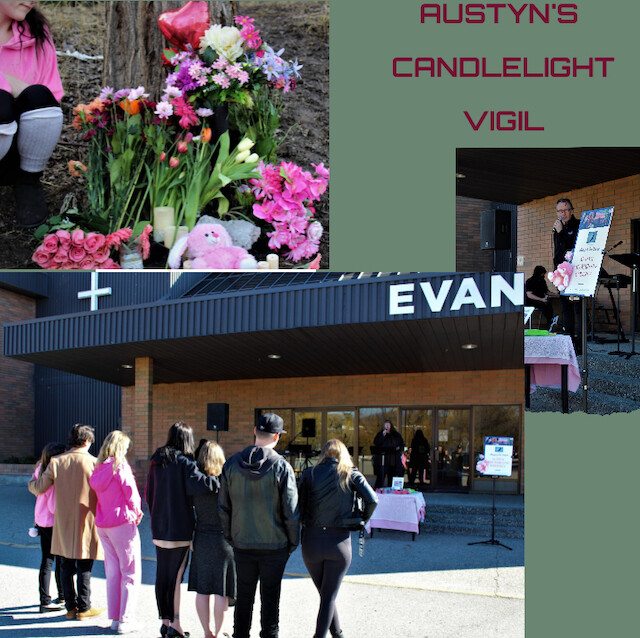 More than 30 people attended Austyn Godfrey’s vigil, whilst an unknown number of supporters watched from their vehicles in the enormous parking lot of the Evangel church last week. Of the 30, 24 were Austyn’s friends.

Pastor Don Richmond of Evangel church officiated and welcomed everyone to the outdoor service. He expressed his sympathy to the bereaved friends of the young woman and said violence against women is a reprehensible crime which has to stop. He said he was honoured Evangel was asked to host the vigil, adding we need to lend our voices to those who can no longer speak for themselves.

I assisted with the eulogy, starting with some shocking statistics from the Canadian Femicide Observatory. As of March 1, 37 women and girls have been killed already in 2022 in Canada, mostly by men. That’s one woman or girl dying every 36 hours. One is too many.

A few people asked why I organized a vigil for Austyn, someone I never met. “Why her, why now? they asked.

For me, attending the makeshift memorial at the dog park (where her body was found) made her death personal. Just reading about it wouldn’t have had the same effect.

As a domestic violence survivor, I was deeply troubled. I realized I was extremely fortunate to survive and thrive and have the chance to grow old. However, Austyn’s life was cut short. She never had the chance at 25. The young woman deserved to live, but tragically, her life was taken.

Austyn’s friend Ashley’s sent an email which was the clincher. She said that she’d love it if I’d organized a vigil for her late friend

I read aloud what Ashley penned regarding the impact Austyn had had on her life. Another friend reaffirmed the poignant message afterwards. It was heartwarming to learn that all of them referred to Austyn as their best friend.

I wondered what it’d be like to have “BFF” (Best Friends Forever) title in the eyes of several people. Austyn must have been a real gem.

They shared the sentiment that Austyn was a happy-go-lucky person with a huge and generous heart. She had a beautiful smile and loved to laugh, enjoying life to the fullest. Her friends were family. She made sure none of them went without. When Ashley’s pay cheque was withheld, Austyn stepped in, unasked, and sent money for takeout and groceries.

The pair later became roommates when Austyn rescued Ashley and her pet rabbit from Alberta. Afterward, Ashley and Austyn became inseparable and purchased matching bracelets with the engraved text “I’ll always be with you.” The bangle is Ashley’s only keepsake of her ‘little pink bunny,” a nickname she lovingly gave her roomie.

Many of the mourners fittingly wore pink to the vigil, Austyn’s favourite colour.

“Dancing in the Sky” by Danni and Lizzy was Austyn’s favourite song and it was played afterwards. It was bitter sweet, but fitting. A procession of people quietly presented flowers and flameless candles and paid their respects in silent prayer while looking at Austyn’s memorial card photo.

After the beautiful service, we travelled in a motorcade to the makeshift memorial. The almost barren tree became enshrined by many colourful bouquets, topped with a pink bunny stuffy.

We overjoyed Ashley and her girlfriends with the service, and they tearfully received the poster and memorial card afterwards, along with my pink bunny.

By organizing a memorial vigil for a stranger, I too felt blessed, as it provided some closure to her companions. They celebrated Austyn’s brief life, stolen so needlessly. My aim was to shine a spotlight on her so she wouldn’t after a time be forgotten.