Memories of saving a hawk rekindle thoughts of the past 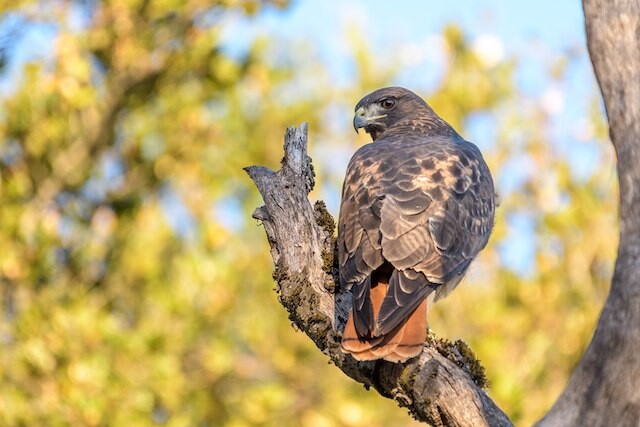 “The hawk’s moving! It’s moving!” I shrieked as the hawk flopped around on the back seat.

I envisioned it shaking off the cover, flying about, and then sinking its talons into us. Thankfully, my then husband pulled over and bound the bird, straight jacket style.

“I’ll need one of those before we get home,” I muttered.

We discovered the starved fledgling in a meadow in the Alberta foothills. The bird couldn’t fly so Marc tossed his coat over top of the hissing predator. It stretched its wings menacingly, making it harder to grab, but he gently cocooned the squawking critter and tied it horizontally behind his western saddle.

Fearing the red-winged hawk would overheat, Marc uncovered its head, and the raptor remained calm as it bounced with the rhythm of the horse. Horseback falconry has existed for eons, which would explain the raptor's composure.

The 17-kilometre trek to the truck didn’t faze the horse or the bird. However, once released into the vehicle’s box, the hawk made a break for it. Marc chased it down and placed the feathered pest behind us, and we traveled nervously home.

Upon our arrival, we fed the bird some raw hamburger and in its ravenous state, it chomped on his finger. I guess it never learned the expression “Don’t bite the hand that feeds you”.

Once the hawk ate its fill, Marc carried it into the empty livestock trailer and created a makeshift straw nest for its bed. I couldn’t help but admire Marc’s ability to catch and care for the wild being. He’d volunteered at a zoo as a teenager, gaining the knowledge necessary for this daring rescue, whereas I’d be too timid to ever attempt such a feat. In-spite-of this, the bird was growing on me. When the time came, I felt sad to see it go.

The next day, they traveled to a raptor sanctuary at Rocky Mountain House but this time, Marc secured the bird in a dog kennel. When the hawk recovered a few months later, the staff freed it into the wilderness.

Hawks are sacred in some aboriginal cultures and Marc, being Métis, felt a kinship towards the raptor. I see them hawks daily now and that connection has grown stronger. It seems they’re aware of the part I played in saving their brother 20 years ago.

While out snowshoeing recently, a hoarse, rasping scream resounded as a red-tailed hawk circled above. The shrill whistle punctured the cold air, and I mimicked her call. Spectators assumed I’d lost my mind, and rightfully so, because I screamed like a banshee.

Undaunted, I observed the bird perch on a treetop, but she flew away once spotted. Briefly, the raptor landed on the power line and fluttered over to a bush to analyze her peculiar human friend. I like to consider her “my” hawk, as I’ve encountered this same bird before.

When you hear their sharp, unmistakable cry, you’re supposed to clear your mind. That’s exactly what I was doing, shedding the gloom and doom of the newscasts I’d woken up to by trudging across an open field.

Regular hawk sightings mean something sacred is about to happen. The Creator will perform a miracle. Last September, my hawk swooped down, over of my car, and as she hovered, she looked me in the eye before ascending into the sky.

Perhaps she was warning me of imminent danger, as these birds have alerted indigenous peoples over the millennia.

The Bible includes many scripture verses about hawks. In Jeremiah chapter 12:9, it says: “My chosen people are like a hawk surrounded and attacked by other hawks.” Perhaps this cryptic message was for me. I’ve experienced bullying but my tormentors found out I wasn’t a push-over. With my feathers ruffled, I’d beak-off and get those claws out.

Job 39:26 says: “God asked Job, ‘Does a hawk fly by your wisdom and spread its wings towards the south?’” Hawks always obey their divine instincts, unlike humans.

If I heeded that still small voice within, my consequences wouldn’t be harsh.

Sadly, I learn the hard way, and who knows what pickles I’ll find myself in during this new year of 2022.