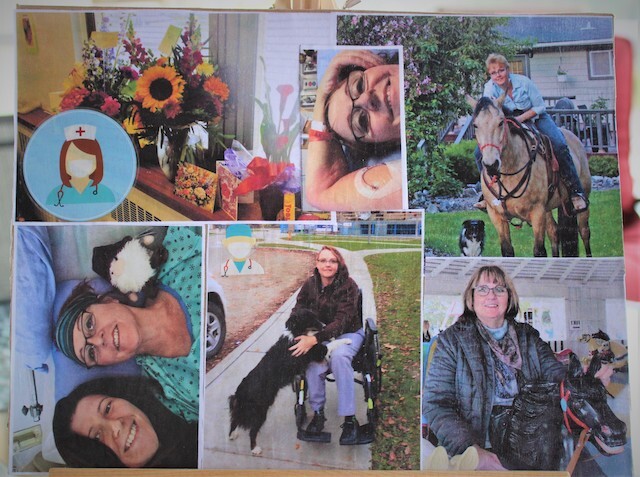 The horse exploded as I threw my leg up over his back.

He bolted and lit into bucking. I had one foot in the stirrup whilst the other dangled free. Meanwhile, the reins were slack and useless. My body slammed against the saddle-horn three times. The first two blows broke my pelvis, while the third tore my bladder open.

The fourth buck shot me off his backside from about three metres in the air and I landed hard on the ground. I narrowly missed a tree trunk by one centimetre with my helmet covered head. It was then I realized I couldn't get up. The horse, now subdued, watched me from a short distance and nibbled on the turf. I cussed at him.

My riding partner Val was delayed, so I dragged myself across the cratered field, over to the neighbours’ property. I grabbed onto handfuls of grass and inched my way towards them. Miraculously, the men outside heard my cries over a diesel engine.

A man named Andy, and his twin teenage boys, hopped the fence and ran towards me. Andy called 911 and reassured me in a soft voice. He touched my arm gently when I tried to get up or writhed around. His son tucked a sweater under my head.

Val appeared shortly thereafter and prayed out loud for me, which was comforting, from one Christian to another.

I could hear ambulance sirens wailing up the driveway, announcing help had arrived. The three men and Val assisted the paramedics with my stretcher. Once I stabilized, they carted me off to Kelowna General Hospital.

The trauma team was waiting. I was whisked away to undergo a CT scan to find out the extent of my injuries. Then I had a vascular embolization procedure to repair the broken veins, and they gave me two units of blood.

During that time, I believe I died and came back. The medical equipment alarms rang out and everything suddenly went black. At that time I heard the creepy voice of the Enemy, telling me I was dead, a goner, finished… I gasped and regained consciousness saying Psalm 23; 4 out loud and called upon Jesus, the great physician, to help me. Next I raised my arms up and softly whispered an old hymn. I recall the medical team staring in disbelief. This spiritual battle was bona fide, as I could feel the icy hands of death reaching across the abyss.

It would be an uphill, nine-week battle from there on in.

I spent the next three agonizing days in the critical care unit, with skilled nurses and doctors who worked diligently to remove blood clots which formed in my bladder and I was flushed out with an irrigation line, with many tubes coming out of both arms and my nose. They syringed out the coagulates. I screamed and shrieked in agony, sounding like a wounded animal.

There were times I wanted to pass away and prayed silently: “Into your hands, Father, I commit my spirit.” But death did not come. My husband, Len, saw a defeated look on my face and begged me: “Please Doreen, don’t give up.”

“Your daughter Candace is on her way,” he told me, “Just hang in there.”

I thought to myself I had better not perish before she gets here.

Two surgeries followed simultaneously. On Sept. 29 an orthopedic surgeon mended my broken pelvis with a plate and pins, while a urologist patched up my lacerated bladder. Six days later, they had to re-open me up to fix another tear. I had sprung a leak out of a suture. I then developed an infection, abdominal sepsis and was on antibiotics for weeks.

When the intravenous failed because of collapsing veins, they inserted a picc line which was a hose that snaked through my upper arm, down into my chest. It then pumped the antibiotics directly towards my heart.

During this ordeal I was blown away by the kindness I received from Christian brothers and sisters and strangers with no religious affiliations.

It was five years on Sept. 21 since that awful accident. I suffered the following injuries;

2) Open book pelvic break—A morbid injury which is frequently lethal from 5% to 50% historically and increases with pelvic sepsis, and falling from a height. Modern advances in trauma care, however, have decreased those numbers significantly.

5) Abdominal sepsis—72% fatal and only about 30% survive the first year after hospitalization.

I am no mathematician but I can say my chances of survival were slim. I’d love to know statistically what my odds were.

Five-years-later, I am doing remarkably well, but I have a new normal. I walk the Rail Trail with my husband regularly and the exercise has improved my mobility and well-being.

We re-homed the horse shortly after the accident so he could receive rehabilitative training. Now I only ride the carousel variety (of horse) and feel much safer that way.

Without a skilled trauma team at KGH and my faith in God, I wouldn’t have made it.

I now count each day as a blessing.