Photo-bombed from the great beyond

The buck stops there 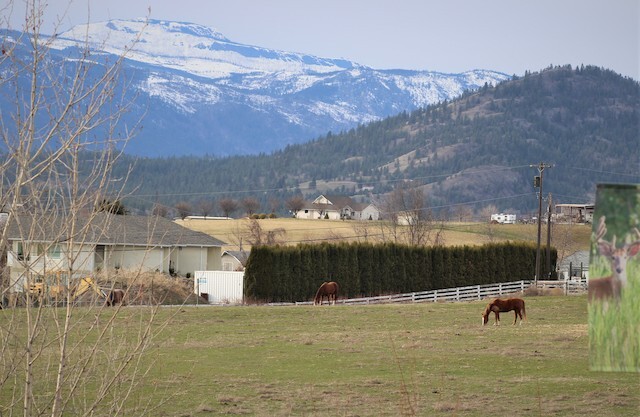 Was it a blip on the camera-card or a glimpse into another dimension? The invisible creature went unseen to the naked eye, but not my lens.

Whatever the cause, a four-point buck materialized from the afterworld. To a computer guru, it was nothing more than a corrupted file on the memory cartridge, but I believed it held a more esoteric meaning, as I didn’t take a picture of this beautiful animal and would have remembered doing so.

Carefully, I scrutinized that device and no such image existed.

A year earlier, I photographed a male deer with smaller antlers and different markings, not the same individual.

In many cultures, the stag is sacred, a protector and a spirit guide. Tibetan legends portray deer as helping people solve their problems.

Perhaps that was the meaning of the photo-bomber. The stag stood in the portal to a parallel universe, telling me I wasn’t alone. He was ready to lend a hoof.

On my birthday, two bucks milled around the gate and when I went back for my camera, only one remained. He warily allowed me to photograph him, but pawed the ground and lowered his head when I came too close.

Those wild eyes pierced right through me, while the greenish aura-like tinge to his coat reminded me of a supernatural entity. A chill swirled down my spine and I respectfully backed up, climbed into my vehicle, and took more shots out the window.

He calmed down, folded his legs and lay on the ground, but watched me intently. By doing this, the buck showed he trusted me to a point.

Other herbivores’ such as a bull, will give identical warning signals and it is important to pay attention. Ignorance of these gestures could prove fatal.

According to some First Nations beliefs, a deer visitation is a relative that's passed on. I had three guests at that same gate.

When one stares at you, it means that they recognize you have a strong intuition and can read people’s emotional states and intentions. Those mammals are telepathic.

I experienced firsthand a deer’s ability to differentiate between people who were harmless and those who weren't. The ex and I had driven around the foothills in November 2008, during hunting season. When a herd of deer saw our SUV, they emerged for a photo op but disappeared again as another truck approached.

The other party was hunters, and the deer knew the difference between our intentions. One group showed up to admire, while the other turned up, hoping to fill their freezer.

By studying deer symbolism, I realized that these gentle beings have been messaging me to trust my perceptions.

I verified this with a hunch that unknown cousins were buried in a nearby cemetery, which I’d never visited. By physically locating and photographing their grave marker, I realized I needed to believe in my intuition.

How much more do I discern regarding the living that I can see, hear and touch, I wondered. Those instincts have saved my bacon countless times and when I’ve disregarded it, suffered the consequences. I learn the hard way.

In a previous story called “The places in-between” I wrote about photographing an antelope on the Saskatchewan prairies which didn’t materialize when I downloaded the images. However, the photos of my step grandchildren taken just before and after the impala sighting did.

The ex and I plainly saw the creature, but the camera couldn’t capture its image.

With the white-tailed buck, he materialized in the picture I took of horses in an over grazed field, but this critter was standing in tall grass within a door shaped rectangle.

When the spirit world manifests physically, it normally doesn’t let you keep its image, while at other times it plays peek-a-boo on film rather than letting you see it in the flesh.

I am relieved it was pretty ungulates instead of ghouls that showed up!

Neil Young’s voice sang out in my brain with “home, home on the Range, where the deer and the antelope play” and in my rendition, with my head.