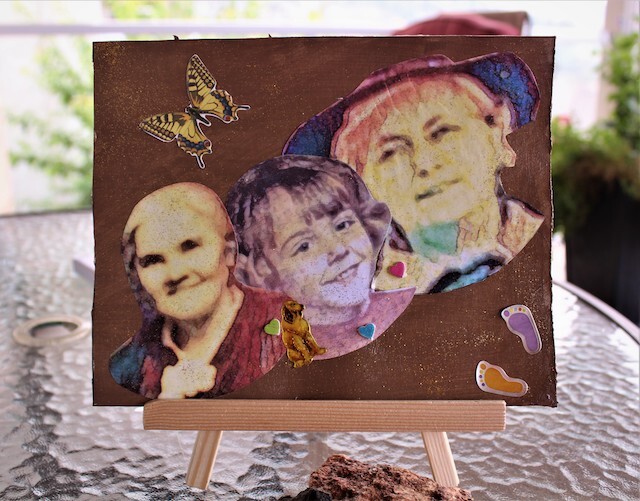 Heidi was on her deathbed. The elderly grandmother’s skin draped over a skeletal frame, a far cry from the robust Amazonian German she once was. Her late husband, Günter, now beckoned her home.

She was delirious, reliving the past, pulling a plough as a 13-year-old human beast of burden. The landowners had given their oxen a break forcing Heidi and others to pull the cultivator instead. The teenage girl endured hard labour for another eight years and looked much older because of it.

Fate intervened one day when Günter, a neighbour, arrived to find Heidi struggling in her harness. Appalled, he took a strip off the taskmaster, then removed Heidi’s yoke from her shoulders, and whisked her away in his wagon. Her enraged handler stood there shaking his fist at them while dust and gravel flew up in his face from the wheels.

It was the early 1900s when they fled their respective European homelands during Stalin’s reign of terror. The same oppression that followed them to North America also brought the couple together.

Heidi was distressed, and out of options, so Günter offered to marry her. She accepted his proposal and the local padre wed them. Oma Heidi wore a black dress, the same used to attend Mass, weddings and memorial services.

Their wedding photo looked more like a funeral. Life was no picnic, as they endured generational trauma, along with their own personal horrors.

Over a brief span, the young couple produced 13 children. One baby died at six months. The other 12 gave them 63 grandchildren.

However, Oma Heidi’s hard existence as a Canadian prairie pioneer was now coming to a close. Zinnia, her granddaughter, heard the frail woman’s breath as it rattled in her throat, and a putrid smell exuded, which frightened the five-year-old.

Oma noticed the child and motioned her over with a bony finger. In a raspy voice, Heidi asked Ziny what she wanted from her and Ziny replied, “I’d like a dog, please.”

Her gnarled, liver-spotted hand reached out from under the wool blanket and dropped a dime in Ziny’s eager palm. She looked at the shiny coin with furrowed brows and stated that it wasn’t enough to buy a dog. The ancient woman cackled as she gasped for air, while the room full of people cracked up laughing.

Ziny’s mom and dad blushed and scolded her; children should be seen and not heard. Shamed and bewildered, Ziny wondered what was wrong with her request. Besides, Ziny wanted a puppy more than anything, and after all, Oma asked.

Soon thereafter, Ziny got her wish, but had to share the pooch with nine siblings when Heidi passed away.

Contrarily, Ziny’s other Grandma, Maisy, was a petite and robust Irishwoman, a force to contend with at 4’2” and 90 pounds of fury. What she lacked in size, she made up for in spirit. Maisy had a charming Irish brogue and a wonderful sense of humour, but could be intense when protecting her own.

Maisy emigrated from Ireland alone at 18 years of age. Years later, she married Graham, a Scotsman, from Ontario, and they moved to Alberta. The couple had three girls and three boys. Sadly, Ziny’s mother’s twin died at 18 months of spinal meningitis.

It was the dirty 30s, and the family was malnourished. Maisy and Graham didn’t own a farm, therefore, could not grow their own produce; even so, they survived on oatmeal and beans. Their brood eventually married and supplied them with 29 grandchildren.

Maisy enjoyed her grandkids once relieved of her mother-bear role. She was always laughing and joking, with Ziny bouncing on her knee. Mam’o treasured the girl’s artwork and made her feel like Picasso. Ziny weathered life’s storms better when Mam’o Maisy was around.

The child followed in grandmother's footsteps as her young protégé.

While visiting Mam’o in the nursing home, Ziny was proud of the fact that Maisy didn’t take any guff. Her golden years were no exception. Maisy tussled with a roommate whom she thought had stolen family photos and other treasures; but they pilfered from each other because of dementia.

The nurses were astounded to find the elderly women lying on the floor in fisticuffs, screaming and yelling with their walkers strewn about the room.

Maisy was a shocking sight, with two black eyes, and scoffing said to her granddaughter, “Hah, you should see what I did to her.”

A part of Ziny died when they buried Mam’o Maisy in that small graveyard close-by, where she’d raised a family a eons ago. In death, Maisy rested next to her predeceased husband, Graham, on a rainy day in 1977.

Ziny stood there stone-cold, feeling at one with the tombstones that surrounded her as the priest delivered the Rite of Committal ceremony.

Mam’o what will I do without you, she asked her descending casket. A mourning wind howled in response.

Zinnia went to visit Maisy once again with her adult daughter 22 years later. It was odd how they honed in on her grave amongst the hundreds of sites. An unseen force guided them.

Although they knew Maisy was asleep in death, Zinnia was undeterred and introduced Mam’o to her great granddaughter Mila.

An unforeseen wind picked up as the women stood by the crypt. They held their breath as a dust devil swirled beside them. Was it Mam’o, they wondered?

Based on a true story, though names have been changed