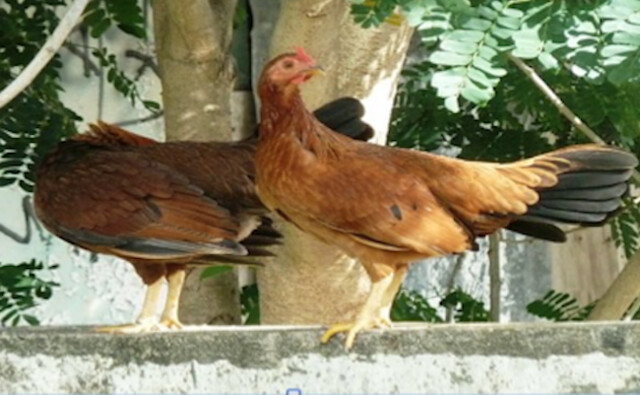 Dad swung the axe and lopped off the chicken’s head, which rolled into the tall grass. Death was quick and virtually painless.

As a youngster, I wondered if the hen was truly dead, or if she’d joined the ranks of the supernatural.

Snakes and snapping turtles can bite after being separated from their bodies, so it seemed logical that a chicken could cause harm, too.

This broiler, it seemed, wanted revenge on her killer and went after his grandson. Blood spurted from the headless chicken as it chased the terrified toddler.

Three-year-old Ted screamed hysterically as he zigzaged desperately, trying to lose the headless bird. The fiendish female fowl seemed to have a heat-tracking sensor and dogged his every step.

As his older and wiser seven-year-old auntie, I’d seen this rodeo before. I knew better than to be close to the action, unlike poor Ted. I crouched in the back of the truck, peeking over the edge, watching the gruesome pursuit unfold.

Forget Sleepy Hollow’s headless horseman. To a tot, the bloody torso of a wing-flapping, sprinting bird could leave him scarred for life.

There’s even a word for it: alektorophobia, an intense fear of chicken.

Ted was a potential future candidate for a psychiatrist's couch, therefore his trauma needed quick resolution.

My brother, Grant, came to the rescue. He bolted across the field and snatched up his son while pushing the bird away with his foot.

The young father cradled Ted before putting the clinging youngster into the back of the truck, telling me to take care of him.

"Don’t cry, Ted, you're OK,” Grant said as he tousled the boy’s hair. “Those chickens can’t hurt you.”

He walked away, gloomy looking with his slumped shoulders as he left his son behind.

After, a macabre scene unfolded. A multitude of gory chicken torsos bustled about. They flew a short distance before slamming to the ground. Others crashed into each other and bounced, while blood squirted from their necks.

The poultry fled from their Grim Reaper, unaware they were already dead.

To this farm kid, it was a live horror movie; I was spellbound in my front-row seat of the cargo bed. When my nephew finally stopped bawling, he inched up beside me to watch the action.

Out of the corner of my eye, I saw Ted wipe his eyes and shudder. He was on high alert, watching for his tormentor, praying she wouldn’t return. Not all beheaded fryers are mean, I explained to him, hoping to ease his fears.

In 1945, way before we were born, there was a famous bird, Mike the Headless Chicken, that lived 18 months after losing his head. The axe missed the jugular vein, so his blood clotted and the brain stem lived on.

The farmer who had planned on having Mike for dinner felt for the bird when he found him with his severed head tucked under his wing. The rooster attempted to groom himself and pecked at the ground in search of food.

Feeling remorseful, the man fed and watered Mike through the neck cavity, using an eye dropper.

The rooster lived in the henhouse with other chickens. They, too, felt compassion for Mike and watched out for him while he regained his strength. The flock treated him like he was a normal cockerel.

Mike was no hen-pecked rooster.

The farmer eventually sold Mike, and the broiler achieved fame and fortune as a circus freak. He made his clown owners a pile of money, to the tune of $40,000. They also featured Mike in Life Magazine and became a worldwide celebrity.

He had lots to crow about, if he could have.

Sadly, the zombie pullet choked to death when the food dropper lodged in his throat cavity.  However, Mike’s memory lives on with a yearly festival in his honour in Fruita, Colo.

Mike was amazing because he took the attempt on his life in stride and made the most of it. He enjoyed his undead stardom instead of getting nasty like your feathered menace did, Ted.

“Life is what you make it,” I told Ted as I rubbed my knuckles across his head. “You can become a little monster chick or the happy-go-lucky freak of nature, that I think you are. The choice is yours.”

More In A Pickle articles