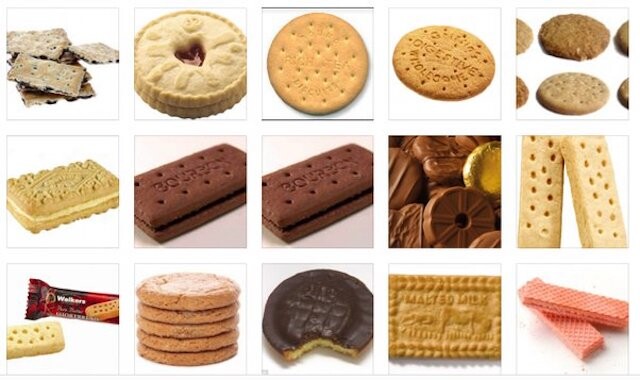 Relating cookies to the general events of our life seems obvious now, since they are a ubiquitous snack. But did you know that cookies have been around for over 5,000 years?

Cookies were found in graves in China (probably left as sustenance for those dearly departed souls for their journey to the otherworld). But biscuits have existed ever since grain has been domesticated.

Nowadays, a biscuit is what a cookie is often called in the U.K. But in ancient times, the original biscuits were rusks, a dried piece of bread with about ten percent water content.

Rusks were often reconstituted with liquid to consume them, sometimes with water but more often with beer in the beginning. It was the Romans who first coined the term “biscuit”, which means “twice cooked”. They were still unsweetened, until Arabic bakers started experimenting with the crystallized sugar they invented.

Biscuits were first adapted with nuts and dried fruit and then spices as the spice trade moved ingredients across regions. It was the Spanish and Italians who developed the idea of eating these sweet, hard treats at the end of a meal. In those days, sugar was seen as very healthy, and many spices were valued for their medicinal value.

Biscuits also lead the way in the Industrial Revolution. They were the first food produced by a steam-powered machine – the first flat biscuits that didn’t have a rusk/bread shape. (If you’ve ever had a Carrs Water Cracker, or Biscuit if you’re in the U.K, you have sampled a descendant of these historic wonders.)

Cadburys was the first company to advertise a chocolate biscuit in the early 1900s, but those didn’t really catch on until they were covered in chocolate (remember, there were no chocolate chips yet).

Even in North America, the term biscuit was used before cookie. The largest bakery in the world is a plant where Nabisco makes many of its products (biscuits, crackers and cookies included.) Their original name was the National Biscuit Company. In Canada, their products use the Christie brand.

In 1912, a quintessential cookie was invented. But did you know it was not the original one of its style? The famous Oreo cookie, made by Nabisco, was an offshoot of the Hydrox, another chocolate sandwich biscuit with vanilla filling. Nabisco had more marketing power than the smaller company making Hydrox, so they eventually won out as the popular choice.

The most popular cookie of all though, for North American audiences, is the chocolate chip cookie. Legend has it that a home baker named Ruth Wakefield invented it by accident and made it famous in her inn that was on a toll road, called The Toll House (hence “toll house cookie”).

The story is that she possibly ran out of butter, or bits of chocolate fell in the dough. But Ruth herself debunked this in conversations with reporters over the years. And there is evidence other recipes were published earlier than hers, as many as 10 to 20 years before Ruth’s famous cookie.

“Chocolate Jumbles”, as the earlier recipe was called, originally had grated chocolate. If you’ve ever tried to grate chocolate you can understand why someone decided to stop grating and start chopping. The pieces of chocolate were called chips, just as wood chips or potato chips.

Despite not being the original effort, Ruth Wakefield’s recipe using a generous amount of brown sugar just as she did in her well-loved butterscotch cookie, is the one that became the most common source for the cookie we know today.

She started giving it out to newspapers and it was picked up by Nestlé to put on their bags of machine-made “chocolate morsels”.

What kind of cookie is your favourite? Are you a dunker of crispy cookies, or do you call them biscuits? Maybe you’re a muncher of soft cookies.

Any way the cookie crumbles is fine by me, as long as there are enough for everyone.