A closer look at what kids are eating for lunch 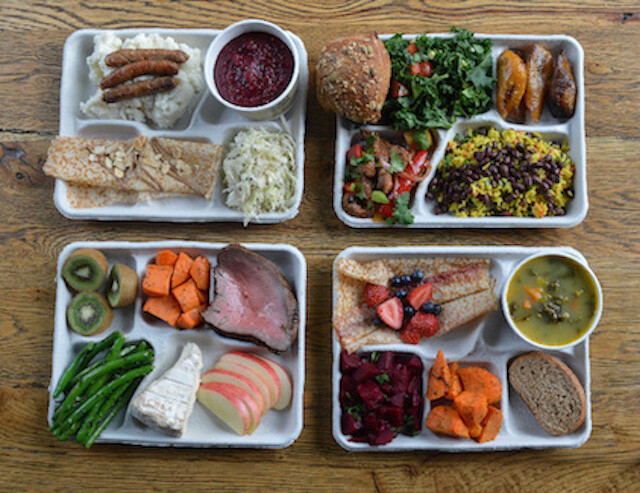 I know we are in the heart of the holiday season and much of the food talk is about party fare and treats for entertaining, but I was struck by something different this week, an article my mom sent me about everyday school lunches around the world.

This article highlighted pictures of typical lunches served to kids. (The picture I posted with this week’s column shows meals in Greece, Italy, Brazil and U.S.) Canada was not included, as these were lunches provided through national programs.)

It is important to note that Canada is the only G7 country that does not have a national school food program. I am not going to get into the topic of food security this week, except to say that everyone deserves access to good food.

The finer point I want to make is the culture behind what we serve as a meal.

When I saw the lunches from Europe and South America, the expression “eat a rainbow” came to mind. When I saw the American lunch, it occurred to me that the colour in fast food comes from the packaging.

Here in Canada, we are not the same as the U.S., although there are many similarities. North America does, however, love convenience.

Our younger cultures don’t have a long history of treating mealtimes as important priorities. In many European countries lunch is set for an hour or two instead of the North American version. How many of us eat lunch at our desks at work, or in the car as we are running errands during the day?

When I worked with a local teacher doing a program with elementary school kids on edible education, we evaluated the snacks and lunches kids brought, as an exercise. They had four categories—fruits and veggies, protein (including dairy), fibre and sweets.

I was amazed to discover how much pre-packaged food was present. Instead of chopped up fruit in a reusable container from home, kids had fruit cups or fruit leather. Instead of yogurt, they had yogurt drinks. Instead of crackers and cheese from home, they had “lunchables”, which are full of sodium and fat.

Lunchables are a great example of the way food marketing has affected our perception of what food we desire. They were created with the pitch that kids could take control of making their own lunch the way they wanted. But they were even less nutritious than what most kids were eating.

Efforts to make them more healthy were kiboshed due to low sales. (You can read more details in this article.

Well-known U.S. chef, the late Julia Child said this as a warning about the attitude towards eating in her home country: “dining is not a fuel stop, it is recreation.”

Meals deserve to be enjoyed instead of simply consumed. When what we eat is attractive, tasty and nourishing, you have the trifecta, rather than just checking a box.

So, if you are sending your kids to school this week with lunch, maybe you could get them to help by pulling ingredients from the fridge, or even choosing them at the store, so they can take part in the process. You can join in if you pack a lunch – there’s nothing like setting an example to reinforce a positive change.