Getting your bite back

People who are edentulous are missing important parts of their bodies, 32 to be exact. They are physically impaired according to the World Health Organization and would be considered disabled by most dentists. Losing your teeth often has devastating consequences.

People without teeth avoid eating a lot of healthy foods; particularly fruit, vegetables and other dietary fibres. They are forced to eat foods that are more processed and are of less nutritional value. This is particularly harmful for those who are vulnerable to malnutrition. 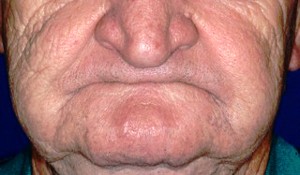 Photo: Contributed
Without dentures, this gentleman was perceived as grumpy and mad.

Without teeth their faces sag, lips cave in and their chins become closer to their noses; making them appear older. They hesitate to smile and are often perceived to be unfriendly, grumpy or mad. Many will not eat in public leading to social isolation, loneliness and depression. They are often ashamed and embarrassed by their condition and this lowers their confidence, self-esteem, and makes their life less enjoyable.

If you are missing all of your teeth you are certainly not alone. A recent survey by Health Canada revealed that approximately one in five adults from age 60-79 were missing all of their teeth; the technical term is "edentulism."

Surprisingly, the number of people wearing dentures is on the rise.

Advances in dentistry have helped reduce the percentage of people requiring dentures from 50% in 1990 to only 20% in 2009. However, the number of people over the age of 65 has doubled since 1990 and represents one of the fastest growing groups in Canadian society.

Teeth are most often lost or extracted due to the effect of two dental diseases, Periodontal Disease and Dental Caries. These diseases are slow to progress and are cumulative in nature so that a disproportional number of elderly are affected. 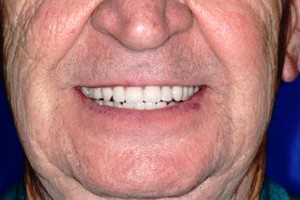 Photo: Contributed
New fixed dentures on dental implants now support his face and allow him to smile so that his appearance matches his sunny disposition.

For those unfortunate enough to lose all of their teeth, there is some good news. Dental implants can help solve many of the problems of dentures. Dental implants have been used to replace teeth and secure dentures for over forty years. It is quite surprising that so many people have never even heard of dental implants and needlessly struggling with problem dentures.

Traditionally, false teeth were held in only by suction and supported only by the soft tissues of your mouth. They move when you bite on them and can fall out when you smile, laugh or sneeze. Dental implants are like tooth root replacements. They are placed in your jaw bone and the denture is attached to them. Because the dental implants function like the natural roots, the dentures feel very much like your natural teeth did.

Now, a unique, cost-efficient dental implant procedure can be one of the fastest ways to replace your dentures. A fixed denture consists of a dental implant bridge that is supported by four or more dental implants. It can often be done in a single day so that you never have to go without teeth. Patients who have received this treatment say they feel a renewed sense of confidence, enjoy an improved quality of life, and have regained the ability to eat and taste the foods they love.

As with most things in life, you don't really miss something until it's gone. Fortunately, there are great options available to replace the teeth that you have lost.

Dr. Duncan Chambers is a Board Certified Dental Specialist in Prosthodontics, the area of dentistry focused on replacing missing teeth and restoring worn or broken teeth to natural form and function. He has over twenty years of experience in creating comfortable dentures, stabilizing dentures with dental implants and making fixed dentures that never need to be removed.

If you are interested in writing a column, email us at: