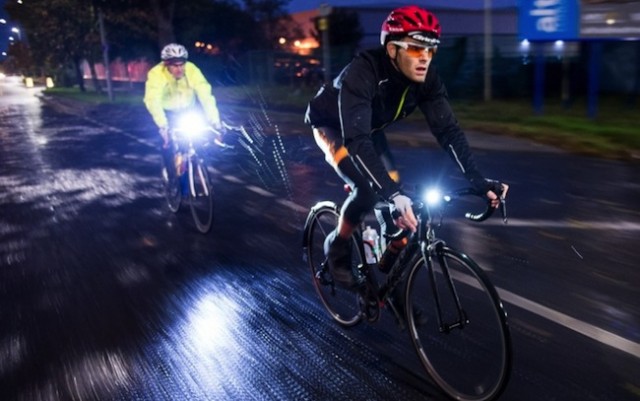 If you overtake me, day or night, the blinking red light is what you'll see.

If you're lucky enough to see me after dark you might catch me from the side and see a fancy pattern of stars or diamonds.

From the front it will be a shining beacon of hope, bright white that will make you think the angels are appearing out of the heavens.

But as you get closer you'll just see it's me, making certain with my lights that you can judge my position and speed while we share the road.

There is a basket of lights at my house. More front lights of varying brightness. Rear lights from big to small with plenty of interesting patterns ready to blink for your attention.

Even bought an EL wire light that goes on the trailer and provides visibility for my groceries or my daughter.

A few years ago, the Kelowna Area Cycling Coalition put together a Light The Night campaign to help bring more awareness to making sure cyclists were thinking about their visibility when the sun goes down.

We all get a bit complacent during the summer with the late night sun and laid-back tourists.

We had the goal of getting more people thinking about lights on bicycles.

Back in 2013, there was a study published that looked at the different types of "visibility" strategies that cyclists used, how far away they thought cars would be able to see them at, and how far they actually could be discerned from the streetscape.

The best finding that came out it was "if you bike more often, you tend to get a better sense of just how invisible you can be at night."

In essence, we, as cyclists, have to start with the assumption that we're invisible and then work up to being visible.

Just like the other study that found drivers who have a bad attitude toward cyclists are more inclined to "not see" people on bicycles.

By promoting the use of lights, I don't want drivers to think that it's solely the responsibility of cyclists to keep themselves safe. This is the wrong position to take.

Car owners would have to think about lights too if their vehicles didn't come with safety features that automatically lit up their vehicles like Christmas trees.

Using lights is a matter of communication. Making certain that all road users have a good chance of noticing you is "best practices" because it fulfills the responsibility we have to others on the roads no matter the mode of transport.

If you're still undecided on the whole blinking versus solid light conundrum, don't worry, the jury is still out and the best advice is to run it the way that you feel most visible.

I use a blinking rear light while I have a combination front light that has a solid bright centre with some pulsing smaller lights around it.

Just as drivers are classified as bozos for not remembering to turn on their lights after dark (hence the need for "automatic" lights as a safety feature in cars), as cyclists we should help brighten on the world after sunset or before sunrise.

I'll continue answering people who tell me my light is on in broad daylight with, "Of course it is. You just saw me and that's what it's there for."