On the wrong side 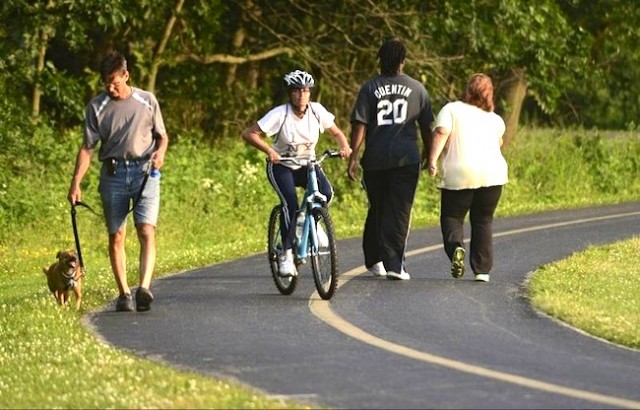 Someone, somewhere decided that building infrastructure that combines all non-motorized traffic was an efficient use of land.

One great fact of non-motorized traffic is that it has a much lower rate of fatalities — less chance of one mode user killing another.

While multi-use paths such as Cawston, Rails With Trails, and Casorso are good examples of ways to move a lot of people, we don’t use them as well as we could.

A great factor in the “low risk of death” aspect of cycling, skateboarding, running, and walking is that by going at relatively low speeds you can see what’s coming. Agility also provides a way to avoid hazards and collisions.

I point out these two aspects for a reason. We’re not using multi-use paths correctly.

No signs, no instructions, batteries not included. They build it and we’ll come.

Intuitively, we travel on the right just like motorized traffic does on vehicle roadways. Nothing usually happens because the traffic (yes, we’re *all* traffic) that is overtaking others will take evasive action before a collision occurs.

This still scares people. Sadly the number of bells on bikes is pretty low and the practice of at least calling out a warning to someone is not second nature.

And don’t let me get started about dogs on leashes.

So my suggestion is that we start doing things a bit differently.

Any user that is on foot — walking, running, taking the pooch out for stroll — should stay to the outside of the path and move in a contraflow direction.

Any user that is rolling on wheels, stay closer to the centre of the path and move in the normal direction of travel.

What this accomplishes is that everyone will have the greatest amount of time to deal with anyone else from a “collision potential.” Fewer number of surprises.

If a walker and a cyclist are coming from opposing directions, they’ll be on the same side of the path but they’ll be able to see each other and negotiate who moves.

If a skateboarder and walker are going the same direction, they are already on opposite sides so no one really has to do much to not collide.

If two cyclists are approaching each they can gently aim to the sides where there won’t be pedestrians, or if there are people on foot they will be able to adjust speed and allow for a smooth blending.

People wearing headphones can use their eyes to see what is going on. Since having no motors means they are pretty silent and hearing won’t be as effective at keeping a person safe as when dealing with cars on the road.

I’ve been doing this for about five years now. Every once in awhile, I find someone else doing the same and if the chance arises I’ll strike up a conversation.

Many times, I’ve discovered that the other person is from Europe where they have these types of trails in abundance and don’t think twice about them. And this is the way they work.

I’ve heard complaints that cyclists and pedestrians don’t like mixing the different modes on the multi-use paths. Here’s an idea that might solve the main complaints such as fast-silent bikers and chaotic-wandering walkers.

The last ingredient that it needs, I leave it to the end to hopefully make the greatest impact: