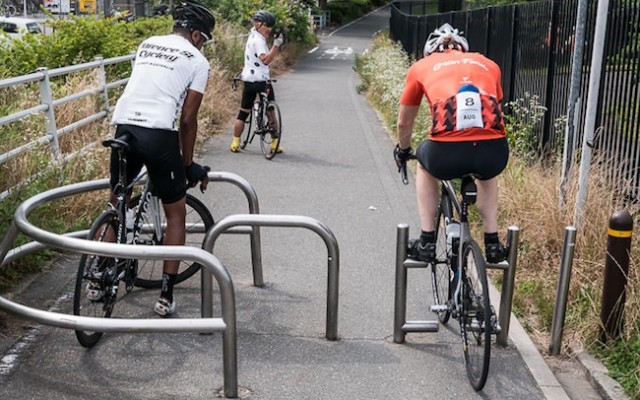 The old rail bed from Kelowna to Vernon is now looking to get new life as a recreation trail and transportation corridor thanks to thousands of donors organized by the Okanagan Rail Trail Initiative.

For the trail to be a success, it needs to:

Drivers don’t like stop-and-start traffic, designers work on making roadways that keep the traffic flowing and minimize the stop/start patterns that waste gas and frustrate people.

Why should cyclists and pedestrians be treated any differently?

The current Rails with Trails contains a few “choke” points where baffle gates are installed. These are installations where two halves of a gate are offset enough so that all traffic has to make an “S” turn to get though.

If you’re like me and have a trailer at times, it means dismounting and walking my bike to get the whole contraption through.

Ever noticed that the baffle gate near High Road and Pheasant Street has a path worn in the dirt behind the bench that avoids the gate? If there is a route that can bypass the gate, it will be used.

What happens when two parties going opposite directions meet at a set of baffle gates? Even if they are handy at manoeuvring through the gates, one group will have to stop and wait for the other group.

Does that sound like a trail you’d want to use? And let’s throw slower moving pedestrians into the mix.

I’ve asked City staff why this was designed this way and they said it was for cyclists' safety.

Anyone who cycles on a regular basis will know that a safe cycling requires three things:

What about using bollards? They don’t force everyone into a conflicting path.

The City of Saanich has started removing the bollards from the trails in its area.

The Capital Regional District has a policy against putting anything on trails that will be used for cycling. Both  these areas have discovered that more accidents happen due to these “safety” measures than occur at intersections with roadways.

Specifically, their guidelines states, “Minimize the use of bollards to avoid creating obstacles for bicyclists.“

CalTrans, the organization responsible for transportation corridor design in California states: “Obstacle posts and gates are fixed objects and placement within the bicycle path travelled way can cause them to be an obstruction to bicyclists.“

I cannot say that cycling is the solution for everyone, but if more people would entertain the idea, we could increase the traffic flow for all modes of transportation instead of continuing to spend outrageous amounts of money on roads that just get clogged with cars.

We need to realize the potential of the Rail Trail and make sure it will serve those who have the opportunity to use it.

Students going to UBCO have been asking for safe cycling facilities for over a decade. Even Mayor Colin Basran, who took the challenge to ride the highway to get to the campus, recognized that the highway route was extremely precarious and would only be used by the fearless few.

If cycling a bike is not taken seriously and treated the same as driving a car, then everything the local government says is just wasted breath and we will become willing victims to a world of gridlock, higher taxes and worsening air quality.