Bikes can have class 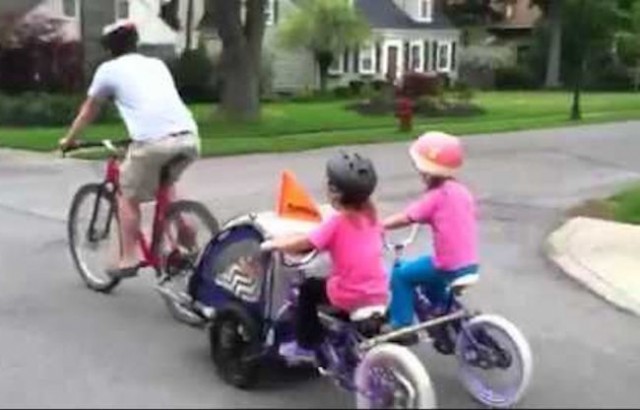 It’s that time of year again when we see a large increase in the number of cyclists during Bike To Work Week.

Bike To Work Week brings out more people every year. People try it for the first time, get indoctrinated and join the bicycultists in the fun of less stress and healthier minds. (Yes, I borrowed “bicycultist” from an anti-cycling columnist out of Toronto who makes me laugh.)

With Bike To Work Week comes an even more important event, Bike To School Week.

While an adult has to get over the idea that life should be convenient to get on a bike, a child doesn’t have this idea; life just is.

Kids have an advantage; they haven’t been told over and over again how their life should be, yet. They’ve been having fun without overwhelming responsibility, and, as parents I hope we haven’t transferred too much of our own stress onto them.

How many people who don’t ride a bike see a cyclist not in spandex and think, “They must not have enough money to buy a car.” A child won’t have the same thought.

There is no preconceived notion and so getting on a bike for a kid won’t have any negative connotations.

It’s funny how my daughter is my testing ground for ideas. She’s four years old and just moved to her third bike. She’s three years ahead of where I was when starting to ride.

I pull out the chariot and my bike and she whines, “I want to take the car.” The struggle ensues as I try to explain that it’s good for daddy’s mental health, heart health, and stress levels.

Things unravel as she cries that she wants to be strapped into the car so she can listen to music. I pull out my bluetooth speaker, fire up a local radio station, and off we roll into the sunset.

I’ve talked to parents who say they drive their kids to school because they don’t feel they’d be safe unless they’re protected by that shell of metal against all the other parents who are carting the kids in the family SUV.

If everyone were to stop driving the children to school, all the kids would be safe from cars.

First thing to getting your child safely to school without a car: find a safe route that you can ride with them.

There are lots of choices and it doesn’t take much to find a good option. Might be as good as green eggs and ham.

It would be amazing to see the bike racks at our schools filled up with kids' cycles.

The old saw of “putting away childish things” when we grow up might count for something like the alphabet blocks and naps. Well, maybe not naps, but definitely avoiding cracks in the sidewalks.

Bicycles shouldn’t be considered one of those childish things and we should help our kids get all the benefits.

Think of biking to school is the gateway activity to biking to work. Set your kids up to have a happier, wealthier life by not spending so much on gas and a vehicle.

Enjoy Bike To Work Week; register your team for some great prizes.

Enjoy Bike To School Week  and win some swag for your school.