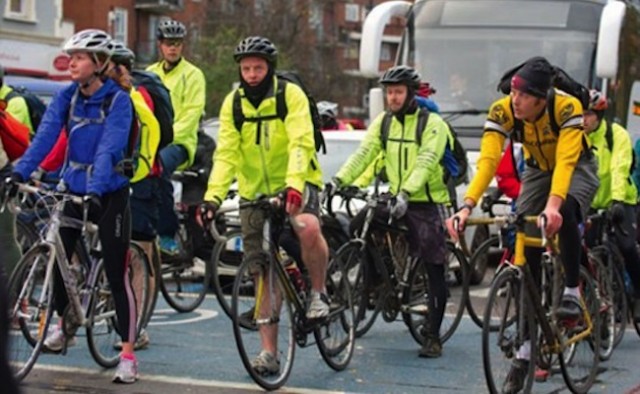 The weather has become better and with the time change, people have more daylight.

Sadly we’ve also seen a couple of disturbing collisions between cars and bikes.

By the numbers, each year we see more people leaving the car at home and pedaling to their destination. In Kelowna, this number is still a small share of the total, but it represents a growing change that more people are willing to make use of an alternative mode of transportation.

Details were very sparse when reading the news of the collisions. On March 4, this was reported: Cyclist, pedestrian struck.

Both of these seem to be what’s known as a “left hook,” where a vehicle turning left hits the oncoming cyclist.

(A “right hook” is where the vehicle makes a right turn and cuts off the cyclist in a side-swipe manoeuvre.)

Left hooks are pretty common because people are looking for big and fast moving and don’t see the smaller, slower-moving cyclist. They might be trying to look too quickly because the larger traffic is overtaking the cyclist, who disappears.

Right hooks are another thing. People rail about cyclists who are riding against the rules of the road because those are the easiest to notice since they don’t follow the expected traffic pattern.

The cyclist who is riding to the right of the vehicle lane and maintaining a straight line just blends in, then WHAM! A car makes a right turn just after passing the unnoticed cyclist.

A great meme that is getting passed around Facebook and other social media sites has a message that really hit home with me as a parent.

“Teach your kids to count bicycles on car trips and they will automatically notice them when they learn to drive.”

Another thing to think about in the spring is that every winter the snow and ice overtakes the roads and the City of Kelowna is out there keeping us safe by sanding and plowing.

When the white stuff disappears, all that crud is left in the bike lane and gutter. The City can’t get out there and sweep soon enough or cover all the roadways fast enough, but they do their best.

During this transition time, cyclists will be riding the white line or they’ll be sharing the vehicle lane. The cyclists will be doing their best to keep themselves safe, while still making the choice to be a road user.

Even with mountain-bike tires, that layer of loose sand and gravel isn’t a surface to trust if something goes wrong.

Other things to watch for are the bright, morning sun and the late, afternoon glare. The angle of the sun makes it harder to see things on the road that aren’t as big as another vehicle.

Make sure you pay attention.

And for those readers who will be automatically ranting about cyclists who behave badly and refuse to follow the rules of the road. Here’s a new study that came out this month, Cyclists break traffic laws for personal safety and to save energy.

I’ve been hit while riding my bicycle, I’ve almost been hit by cars, and I’ve even hit someone on a bicycle, thankfully nothing that anyone couldn’t walk away from.

It’s all our responsibility to make sure that preventable mistakes are prevented.