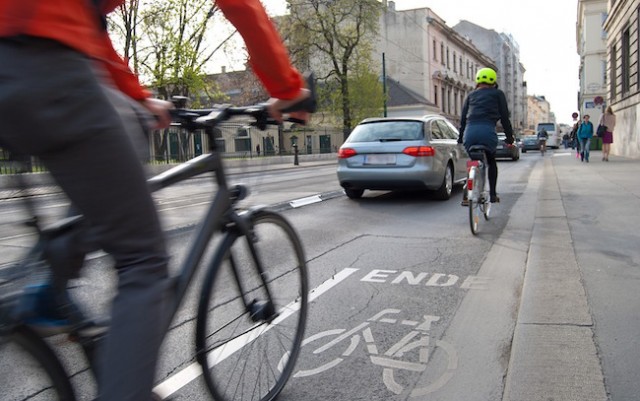 There was one part of it that really shows how marginalized people on bicycles are and this needs to be discussed.

During previous discussions with city staff about the future of cycling in Kelowna, it was suggested that Lawrence Avenue would become an integral part of the overall network.

This would create a straight shot from Parkinson Rec to City Park that would deposit people one block off Bernard — easy access to downtown by bicycle.

The adopted Master Plan moved the cycling corridor from Lawrence Avenue to Leon Avenue. Various people attribute this change to pushback by businesses and the DKA since it would affect the existing parking along the north-side of Lawrence Avenue.

If you go back to the 2012 Downtown Plan, there are two points that would apply here:

I would argue that while the Bernard revitalization is a good start toward point  No. 1, moving the bike route one block closer to Harvey is the opposite.

Of course, this is sourced from the same proposed plan that called for changing Leon Avenue and Lawrence Avenue from one-way into two-way roads and we don’t know where that is going, though it looks like it’s off the table.

Anyone who has been in downtown during the morning and afternoon rush hours will know what happens at the intersections at Leon Avenue at Ethel, Richter, Pandosy, Water and Abbott:

Backed up with cars waiting to cross Harvey or turn onto Harvey, sometimes with cars blocking cross-traffic at those intersections.

The design of the bike route would need to be a bi-directional lane running along the right side of the street. The safest position of the bike lane would be to make vehicles turn right across it instead of trying to turn left which would require a unusual shoulder check to the rear-left.

If someone is cycling to downtown, they would presumably ride west then turn north to get closer to Bernard and the cultural district.

When the bike moves further away from the most popular destinations then either the cyclists won’t use the facilities or they will opt for a different mode of transport.

Let’s bring up the elephant in the room, the intersection of Richter, either at Lawrence or Leon.

The cycling traffic, which would be riding on both sides of the road east of Richter, will need to merge to a single side of the road for the bi-directional bike lane west of Richter.

Searching for examples where this has already been thought out doesn’t yield any results. Even contacting NACTO produced no prebuilt solutions for this.

The only way that makes sense without spending extra money or having to create a new facility causing everyone to learn how to use is to introduce an extra light phase.

This phase would halt all north/south traffic and stops vehicles from going east-west and allow the cyclists to move freely. This would also mean that when the cars are moving there will be a direction of cycling traffic that will have to be stopped.

The result being that a full light cycle would be longer when bicycles are present, affecting north and southbound traffic. As can be seen too often, drivers have a tendency to block the intersection if they get impatient and think they can get far enough across to defend their actions.

Having two blocks separating this from the highway is safer than only one. I hope we can agree on that.

Or can we find a better solution that still fulfills the goals of the OCP and the Pedestrian and Cycling Master Plan?

To people with only the driving perspective on this and might worry about seeing more cycling infrastructure -- cyclists will be on the roads with you, that’s a given.

Separating them into bike lanes will only improve congested areas by not making them ride in the vehicle lanes.

But let’s be smart about it and remember why we’re doing it and not compromise for special interest groups.

The money will be spent, let’s make sure that it’s going to be effective and not wasted.