A new movement to build a self-sustaining village for orphans in Haiti is being fronted by a Kelowna dentist.

Jonathan Visscher, owner of Okanagan Smiles Dentistry, first visited the country in 2009, with the hope of brightening a few smiles. Four years later, as the founding director of the Canadian branch of New Reality International (NRI), he returned to Haiti’s Trou du Nord in January. 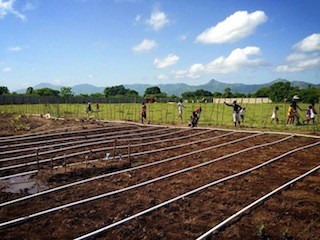 He had heard about seven Haitian neighbours who took turns feeding 24 orphans, and their quest to find a permanent, sustainable solution for housing and food.

“We saw this as an opportunity to help these kids by giving them not just a roof and food, but family, skills and support that will make a real, lasting difference in the community,” says Visscher.

That trip was the beginning of Project 7 Children’s Village, an initiative that will give beds and a future to over 100 orphaned, abandoned, abused, and at-risk children.

The project is currently building its first two solar-powered homes, where groups of eight children will live with surrogate parents. In addition to the homes, the acreage also has a solar-powered well and water purification system, hundreds of fruit trees and chickens, which they may use for food or to sell. There will also be a chapel, a medical clinic, and a vocational centre where children can learn welding, mechanics, carpentry, music, and sewing.

“This is sustainable and it’s really helping the country because these kids will have the skills and the family support to go on and have healthy families of their own,” says Visscher. “This is teaching them to feed themselves.”

For more information about Project 7 or to make a donation, visit New Reality International Project 7