Pickleball a boost for PRH 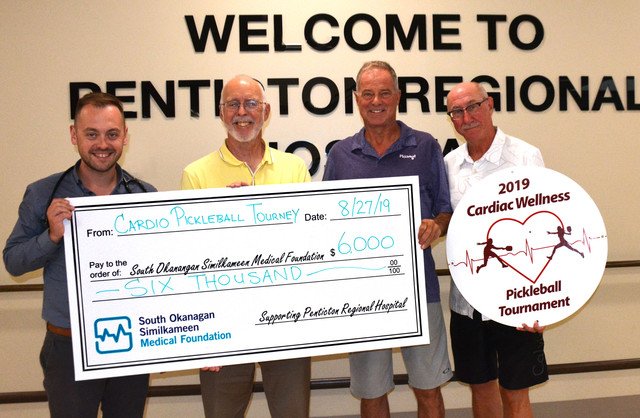 The fun July 27 tourney, which introduced the sport to some 40 staff members from Penticton Regional
Hospital and first responders, raised $6,000 for cardiology equipment at PRH. The Penticton Pickleball
Club also gained $6,000 for a heart defibrillator and to help fund four more courts at the Seniors Centre
on South Main Street.

Event co-organizer Gary Gierlich described the tournament as a resounding success. “We’re really happy with the response we got from the players and the tournament’s 20 corporate sponsors,” Gierlich said. “Several pickleball club members also helped out.” Gierlich was playing pickleball at the Community Centre gymnasium on April 16, 2015 when he suddenly collapsed from a cardiac arrest at age 59. Two lifeguards at the centre’s nearby pool used a defibrillator to get his heart beating again. He later underwent quadruple bypass surgery.
“The healthcare system was amazing. The staff were unbelievably caring and professional,” he said. It’s hoped a similar tournament will be held next year.