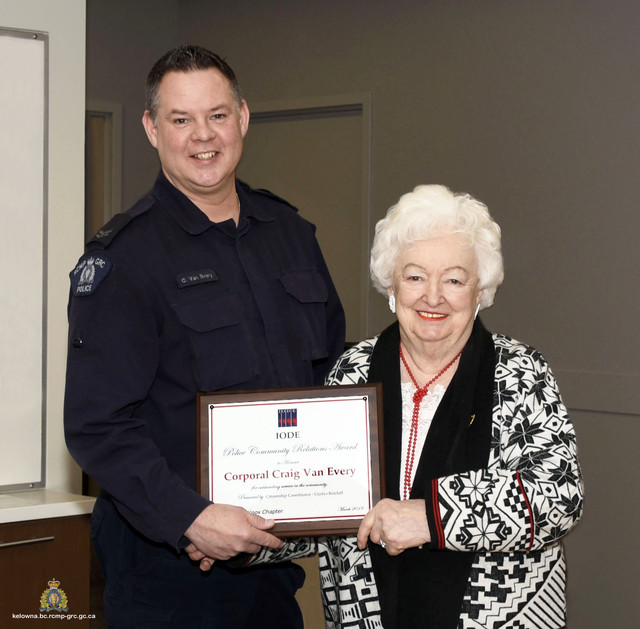 During a recent gathering inside the Kelowna Detachment, members of the International Order of Daughters of the Empire (IODE) honoured a local RCMP officer for his outstanding commitment to his community.

Year after year the local Dr. W.J. Knox chapter of the IODE presents an award to a deserving member of the Royal Canadian Mounted Police, in the Central Okanagan, who has done special public service to the communities they serve, over and above their regular policing duties.

Gathered amongst his peers, forensic specialist, Corporal Craig Van Every of the Kelowna RCMP Integrated Forensic Identification Section was presented with the 2019 Police Community Relations IODE Award for his outstanding work with youth in West Kelowna.

“Cpl. Van Every has been coaching youth hockey and ringette on the ice for over 13 years now. He is currently one of the coaches of an under 19 West Kelowna ringette team,” states Cpl. Jesse O’Donaghey. “Craig is very well known in the West Kelowna community for his true dedication to young athletes and immense passion for sports.”

When he’s not analysing and recording a crime scene, or processing physical evidence for fingerprints or DNA, Craig spends countless hours in the hockey rink every week. To top it off, when he’s not coaching youth on the rink, he is often volunteering his time off ice mentoring other coaches or managing the administrative tasks for his teams.