Engaging young minds in the garden 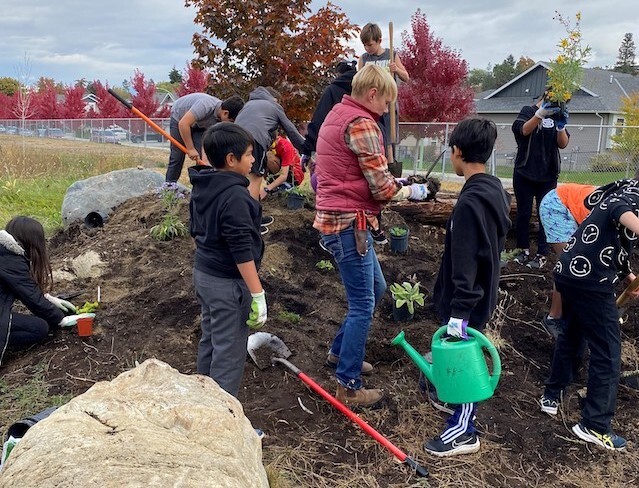 Recently the Okanagan Xeriscape Association was approached by the Okanagan Christian School to consult on a sustainable school planting and provide a xeriscape presentation to a class of Grade 5 and 6 students.

I have given xeriscape presentations to a wide variety of organizations over the years, but I had never spoken to young people like this. I was simultaneously excited and terrified.

Reminiscing about my own schooling, and considering the educators who had had a profound influence on me when I was growing up, I realized one of those influential people was my Grade 5 science teacher. To this day I can recall his name and, in doing so, realize the huge opportunity with which I was presented.

Not only could I teach this class about xeriscape, proper plant selection and planting methods, but hopefully I could learn how to more-effectively engage these young minds—our collective future.

Learning is a lifelong process and it can offer countless opportunities for personal growth at any age. I remember my mother saying the day one stops learning is the day one begins to die.

Some, not all of the terror, abated.

I met with the teacher who approached OXA about the collaboration, to view the planting area, and to say it was a challenging one would be an understatement. The berm was the site of an old volleyball court, so it was almost completely sand, extremely fast-draining. It was also weed-infested.

The teacher mentioned that over the years they had tried to grow a number of ground covers, with little success. The plants selected for the site would have to be extremely drought-tolerant in order to survive and flourish in the tough existing conditions. It was decided we would have the best success by choosing species native to our Okanagan Valley.

I would be remiss without saying a huge thank you to Xen Nursery, the native plant nursery in West Kelowna that donated many of the plants used in the project at the Okanagan Christian School.

You can find plant profiles on many of the plants used on our plant database at www.okanaganxeriscape.org simply by clicking on “Native to the Okanagan” under plant features in the database’s search engine.

The weekend prior to the presentation and planting, the teacher, OXA volunteers and I spent hours clearing the site of the substantial collection of weeds. I planned a condensed presentation fearing the subject might not be of interest to the students. I ended up being pleasantly surprised.

Of course, there will always be the class clown and disrupter but many of the students showed an interest in, and knowledge of, xeriscape. I did not expected that.

Several shared experiences of their own gardens, whether edible or ornamental, and a few were actively composting in the garden. My misconceptions about my audience could not have been further from reality.

The real fun began when we got outside to start the planting and the students were armed with shovels and buckets of water. A bit of chaos ensued but eventually everyone calmed down and I was able to educate them on proper planting techniques.

I instructed them on the planting method I learned years ago from Gwen Steele, OXA co-founder and long-time mentor of mine. No matter how heavy your plant pot may feel, I always begin by submerging the plant, pot and all, in a five-gallon bucket of water until all of the air bubbles dissipate. That ensures that water has reached the middle of the plant’s root ball, which is often surprisingly dry.

After all of the plants were situated properly, I explained the importance of creating a little soil berm on the low side of the planting area with which to catch any moisture—be it irrigation or nature-provided. There was no quiz at the end of the day but I would like to think that if given, most of the students would have passed with flying colours.

Personally, I learned these young minds were willing to be engaged in learning about water conservation, a necessity given the world they will inherit.

The Okanagan Xeriscape Association is extremely grateful for the ongoing financial support of the Okanagan Basin Water Board and is proud to collaborate with it on its Make Water Work campaign.

Sigrie Kendrick is a Master Gardener and executive-director of the Okanagan Xeriscape Association and can be reached at 778-363-8360 or by email at [email protected].

I inherited my passion for gardening from my Australian grandfather, a renowned rose breeder in New South Wales. My interest in water conservation started early after a childhood spent growing up in the desert of Saudi Arabia, when a day of rain was cause for a national holiday.

After meeting Gwen Steele, co-founder of the OXA through the Master Gardener Program, I became passionate about promoting xeriscape. I joined the OXA board as a director in 2015 and became executive director in 2019.

When not promoting the principles of xeriscape and gardening for clients throughout the valley, I can be found on a rural property outside of Kelowna where I harvest thousands of litres of rainwater with which to water my own xeriscape gardens.