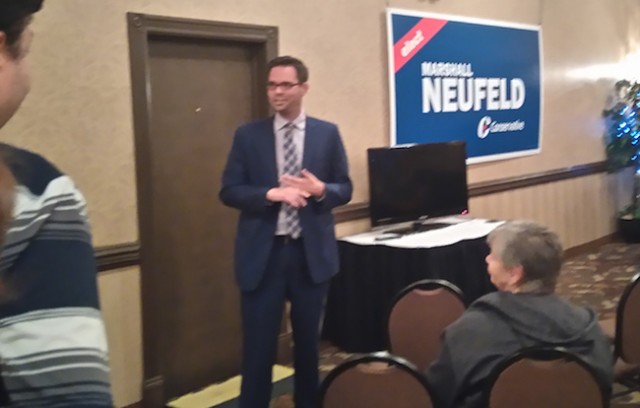 As Prime Minister-elect Justin Trudeau's victory speech rolled to a conclusion, someone among the Conservative faithful in Penticton switched off the television to let Marshall Neufeld make his concession address.

Candidate Neufeld thanked the assembled volunteers for their hard work, noting the losing campaign had knocked on between 22,000 and 23,000 doors but, "It didn't work out the way we had hoped."

The candidate, who aligned himself early in the campaign with the Reform Party roots of his mentor, former area MP Stockwell Day, was in third place behind New Democrat Richard Cannings and Liberal Connie Denesiuk at the time of his speech.

The room at the Ramada conference centre in Penticton featured a raised platform with Canadian flags, a lectern and a large "Elect Neufeld" sign.

The set was clearly meant for a victory address. A subdued Neufeld ignored the platform and made his remarks from the floor, surrounded by supporters.

Neufeld noted he had called Cannings to congratulate him and said, "I expect he will a good representative for this riding."

In an interview following his speech, Neufeld refused to speculate on why he lost, saying he is "thankful for the support he did receive and proud of the campaign.

He also would not say whether he will run for office in the future, but acknowledged that, at 33, he is still young enough to have many campaigns ahead of him.