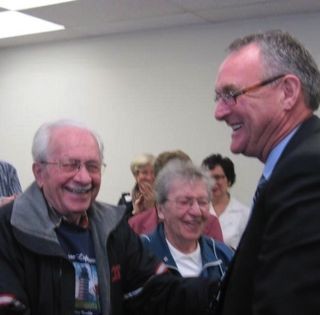 It was all smiles and hugs at the Vernon campaign headquarters for Conservative Colin Mayes as he retained his seat in government for the third straight election.

The former mayor of Salmon Arm and Dawson City, Yukon says the drive for a Conservative majority in Canada was not a surprise to him.

"Canadians decided they had enough of these elections and are willing to take a chance on Stephen Harper and give him the mandate and let him go forward for four years, then they can make that decision whether they want to keep supporting him."

Mayes says its important now for his party to use this strong mandate they have been given and lead Canada for the next four years.

"Our government has to continue our economic action plan.  We've proven we can handle the economy.   We've got more things to get that deficit down and balance our buget.  We have more things we'd like to do as far as innovation technology.  We have to lead the world as far as the economy and of course the new global economy is high tech, and we need to make sure we have strategic investments in those areas."

The collapse of the federal Liberal party and the surge from the NDP caught most Canadians by surprise including Mayes.

"The interesting thing for me is what happened to the Liberal party.  The NDP picked up their votes from the Bloc and the Liberals and we are winning some of those major seats in Toronto. We've always had a pretty good hold on the west but to see Ontario swing and see the strength of the NDP in Quebec and in Atlantic Canada was quite surprising."

Now Mayes says the ball is in the NDP's court to show they can be a solid opposition.

"A good opposition is good for democracy. I think it's great we have our majority. We have to prove ourselves, but I think its important to have a strong opposition and obviously Canadians were ready to see the NDP take on that task.  I will be interesting to see how they perform now that they are the official opposition.  They can't just criticize everything and know that your never going to be government.  Now you have to look at the budget before you criticize it.  I think it's important for the NDP, they have some things to prove to Canadians and as a majority government, we do too!"