While specific numbers won't be released until sometime Tuesday, it appears as if votes in advance of next of next Monday's federal election are up. 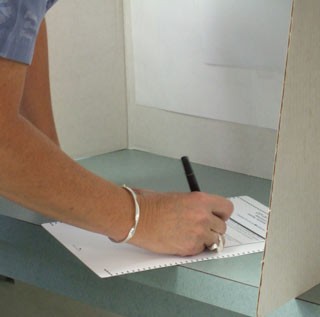 Susan Friend with Elections Canada says from information she is receiving from polling stations it appears as if advance polling is up about 20 per cent over the last election.

In 2006, approximately 20,000 people cast ballots in the three federal Okanagan ridings while nearly 18,000 people took advantage of advance polls in 2008.

Advance polls for the May 2nd election were held last Friday (Good Friday) and Saturday with the final advance poll Monday from noon until 8 p.m.

"What I am hearing is that it was very, very busy on Friday from when the polls opened until about 3 o'clock. There is always a rush on the first day of advanced polling, everybody goes at noon and that';s why there are line-ups," says Friend.

"It kind of settled down after that. It was steady the rest of the day and it was steady also on Saturday. What I'm hearing from RO's (Returning Officers) across the province is that at the moment it is estimated about a 20 per cent increase at the advance polls over the last election."

Friend says it's impossible to tell how those numbers will translate come election day next Monday.

Eligible voters must cast their ballot at the polling station indicated on the voter information card received in the mail recently.

People who have not received a voter information card can register to vote by any of the following ways:

To find out where your polling station is, click here. http://www.elections.ca/scripts/pss/FindED.aspx?L=e