Kyle Harms wants you to vote.

The third year economics student at UBCO organized Kelowna`s first ever "vote mob" Thursday afternoon.  With the federal election days away, Harms was disturbed at the lack of political interest displayed both now and in the past by many of his peers. 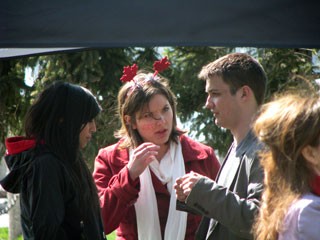 ``There`s lots of opportunity and you can`t tell me you`re not available. Another big one is 'my vote won`t count'. That's totally incorrect." says Harms.

"Because of the voter subsidies, every party gets funding from the votes, and that can have an impact in the next election. Every single vote counts, regardless of whether people think they do."

As a result, Harms and a number of other politically motivated youth decided it was time to encourage younger people to vote, and that the best way to do that was with the use of social media.

By contacting their friends through twitter and Facebook, and encouraging those friends to contact everyone they know, a 'mob' can be created.  That mob was invited to Kerry Park in downtown Kelowna to show up and create a video encouraging Canadian youth to vote May 2.

"I think everyone here today will vote," says Ashley Cail, who choreographed the mob for the video. "I hope when people watch the video, they'll get out and vote."

But Cail admits she does have friends who aren't planning on voting.

"I try to convince them, but I still hear 'my vote won't change anything' and that makes me sad. I hope when they see this (the video) they start considering it. There's 3 million of us (18-24 year olds) and only 38 % voted in the last election. I really hope we tap in to our resources to make change in this country" 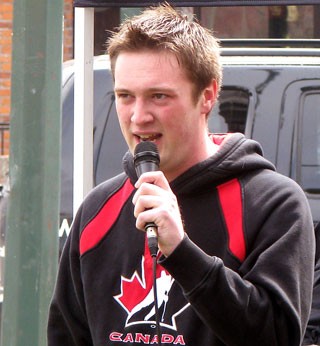 Photo: Grant Scott
Kevin Craig was19 when he was elected to Kelowna City Council

Those who think they are too young to make change happen need look no  further than Kelowna City Councillor Kevin Craig, who decided he was going to make a difference and get elected as a 19 year old.

"I was passionate and I believed in it and I worked hard to make it happen. I felt that by getting involved I could shape the community I live in," says Craig.

"You can do that by being a candidate, but you can also do that simply by voting, by making your voice heard through an election campaign. I hope that's what all the students in Kelowna will do."

The event was also attended by the four candidates running in the Okanagan-Coquihalla riding, including Ron Cannan, Kris Stewart, Tisha Kalmanovitch and Alice Hooper, and all four echoed the message to get out and vote, and to get their friends to the ballot box as well.

When the speeches were done, it was time to start dancing.

The mob took to the stage at Kerry Park where they danced to the sounds of Will. I. Am's hit "It's a New Day". They also displayed signs urging everybody to learn about the candidates to make an informed decision on May 2.

Organizers are hoping the video will go viral and spread the message across the country that every vote counts.