The number of people who vote in Canada has been declining steadily over the last few elections and the age group between 18-35 accounts for the weakest numbers at the Canadian polls when it comes to election day. 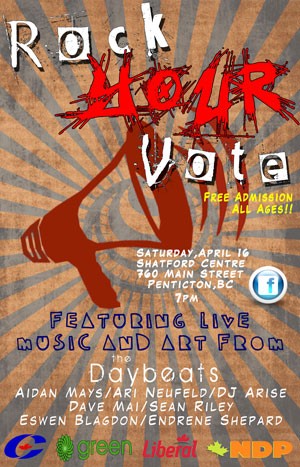 On Saturday April 16, at 7 p.m., Rock Your Vote will try to change that by reaching out in a new way to appeal to this demographic.

That night, a number of local musicians and artists will be donating their time to help raise awareness of voting and politics among youth and their important role in the future of the country.

They will be joined by all the candidates running in the Okanagan-Coquihalla riding for an evening of live music and art at the Shatford Centre in Penticton. The event is free and for all ages.

Liberal John Kidder says .“Revolution and evolution come from people making noise and taking action. Without new voters, politics will be left to the nearly dead talking heads who run the show now.”

"It is vitally important to connect and encourage our youth to be the best they can be-­as citizens and future leaders,” says Conservative Dan Albas.

In fact, all the candidates running in the riding agree that the country's youth need to more involved politically.

The Green Party's Dan Bouchard  called it a “great opportunity for youth to get off the sidelines and get into the game,” while independent Shawn Upshaw reminded that “You are the voice of our future.”

Rock Your Vote will give everyone an opportunity to ask questions of the candidates, offer opinion and get information on why, where and how to vote, in a comfortable fun environment.