Get off the diet rollercoaster

Diets are not the answer 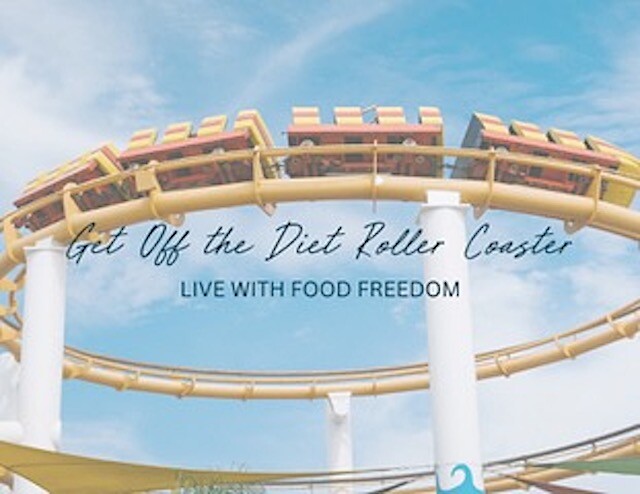 Diets make big promises, play on vulnerability and desperation to get people to buy in. The problem is that what you're buying into is tantamount to snake oil.

I talk to a lot of people and regardless of where they come from or what they've been doing or not doing for their health, they all pretty much say the same things. “I'm just exhausted”. “I have no energy”. “I've tried so many things but I always gain it back”. “I'm not comfortable”. “I just want to feel good in my skin.” “It shouldn't be this hard....”

They're right, it shouldn't be. So why are so many people frustrated, confused and feeling like no matter what they do it's just not enough? In a word, diet. They feel they have failed (again) and blame themselves that it didn't work.

There's a lot of hype around the “diet du jour”, positioning it as something unique, that it will finally be the thing you need to do to lose that weight. Diets lure you with the promise of quick results, and then hook you when emotions are high and you're desperate for a solution. Sound familiar?

“But it worked the last time...”, is also something else I hear a lot. But, if the requirements were such that you were unable to stick to it and keep those results while still living your normal life, you've got to ask yourself, did it really work?

It's difficult these days to meet someone who isn't on, or hasn't been on, a diet of some sort at one time or another in their lives, particularly now after the last few years when routines, habits and life in general was turned upside down. Emerging from the chaos and confinement, many have found themselves more health-focused, but with unwanted weight and no strategies for how to take it off, and keep it off.

Diets have taught us that in order to be successful you're going to have to cut out certain foods, you'll need to count, track, weigh and measure every morsel you put in your mouth and the unpleasantness you're feeling in your body is simply a sign that it's working.

Oh, and unless you stick to the script perfectly, each and every day, well good luck taking any weight off at all.

Apparently, you just didn't have it in you, you didn't want it bad enough, you missed something, whatever. Diets blame you when you don't get the results, or get some results and then end up gaining the weight back.

I remember as a teenager, my nana would always say she was on a diet. I don't know how many times I heard her say, “I lost 20 pounds,” which was the same 20 pounds she lost the last time.

It wasn't that she didn't try, or didn’t have had the discipline to put in the work, it's just that she was following something set her up to fail.

I remember her saying to me, “You've got to suffer to be beautiful.” Nana's diet of choice was simply to not eat. She would survive for days on an egg and a cup of coffee. So, she'd lose the weight but then when she went back to living her normal life, it would all come back.

Even as a teenager, I knew what she was doing was wrong. The diet industry has brainwashed people—mostly women—to believe if they don't get the weight off, 1. It's their own fault, and 2. The scale determines their worth.

Once you're riding that diet roller coaster it can be difficult to get off and that's exactly how the industry is set up.

It is similar to the way many appliances are manufactured with planned obsolescence in the design. Your mother's washing machine may have lasted well over 20 years, but the one you purchased just eight years ago died in mid-cycle. They aren't built to go the long haul any more, on purpose.

The same goes for diets. You start a diet and you're doing something new and start to lose weight. You feel it's working and six or eight weeks in you're hanging on by your fingernails, trying to follow it to the T. You then realize it's just not sustainable so you look for another diet. Statistics say less than one percent of people can maintain a diet for life and that every 90 days, people buy another diet book.

Losing weight should be the same as what we do to maintain that weight loss. The way our bodies were created to function supports that. Think about a baby. A baby doesn't skip meals, eat frequently throughout the day. He or she does not stuff or deprive themselves. And what are they eating? Breastmilk. It and formula are a balance of a protein, fat and a carb together.

Our bodies didn't change in the way they take in and metabolize food as we got older. We simply became bigger humans.

If you're done dieting and are ready to live with food freedom, email [email protected] to book a free 30 min call today.