Focus on the good, not the bad when it comes to your eating habits 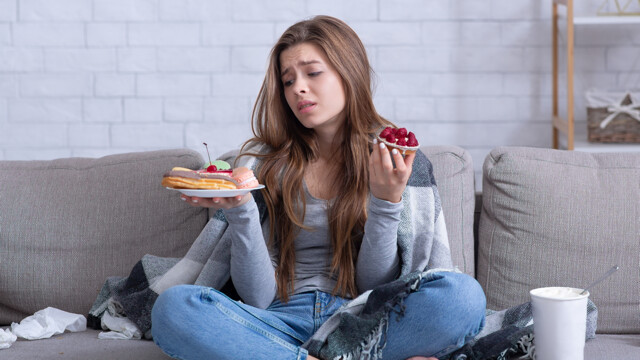 Food guilt comes from knowing a food is not so good for you, and eating it anyway.

Here we are, the first few days into December. Christmas lights are shining around the city, people are decking the halls and attending parties and family, friends, fun and food make it a good time—unless you're that person who is great with the first three, but views the last, food, as one of those unmentionable four-letter words.

Maybe you are someone who, as soon as food is involved, begins to feel some level of guilt about what you just ate. If this is you, you're not alone.

A March 2019 article in the New York Post did a piece on this very topic and reported that, a new study found Americans, increasingly aware of healthier and more natural alternatives, feel guilt about 29% of the food they eat on average.

Those feelings of guilt struck about five separate times per week, lasting around 20 minutes each time. The Post further reported that 36% felt bad after eating dinner and a whopping 42% felt more guilt after snacking. That's a lot of bad feelings for a lot of people about food.

Love it or hate it, we all need food to live. Food is part of almost every holiday and special occasion we celebrate. And I highly doubt that's gonna change.

So, doing what you can to ease—and maybe even eliminate—that guilt, and bring back a healthy relationship with food, would seem the right thing to do. Agreed? Good.

As the Post article reported, food guilt comes from knowing a food is not so good for you, and eating it anyway. The guilt comes from choosing to do the wrong thing. But what causes people to knowingly choose what they, themselves, would consider to be the “wrong” thing? Here are two things to think about that will trigger that behaviour.

The first is restriction. Often, in an effort to manage health and/or weight, people incorrectly buy into that they must eliminate certain foods and/or restrict when they eat. Diets do this. Some eliminate carbs, others fat. There are those that say you must only eat at certain hours of the day, where others say it doesn't matter, just as long as you don't consume more than a certain number of calories per day.

For the most part, people tend to like to follow the rules. Follow those rules, stick to the program and, voila! Success, right? But when there are so many conflicting rules, the tendency is to feel you're not doing anything right. And because food is essential and not eating is not an option, you choices are all “bad” in some way.

She's absolutely right. Most reasonable people would agree, even if they don't know much about health because it just makes sense. However, what tends to happen is, you eat something you wish you hadn't, beat yourself up about it and then throw in the towel telling yourself, “I blew it! Everything is ruined. Imight as well just call it a day and maybe start again next week.”

By doing that, the one meal turned into several meals over several days. That one meal we all agreed would not make or break anything, immediately became a trend and I'm sure we can all agree that eating unhealthy foods multiple times over an extended period will pack on those extra pounds and wreak havoc on your health.

Any negative thought floating around in your head, requires about 20 positive thoughts to counteract the ill effects. So shift the focus to all the things you are doing right and celebrate those. Trust me, you're all doing some things right.

So, when you do eat something and feel that guilt start to creep up, stop – you can even stand tall and put up your hand, physically, just as if you were a police officer stopping traffic. That helps put the brakes on the negative self-talk that comes with the guilt. And then start naming, out loud, all the things you did right for your health that day.

So, you grabbed a cookie from the staff room during a break. Yep, maybe not the best choice. But instead of letting it drive you crazy for the rest of the day and drowning that guilt in a peppermint mocha on the way home and then ordering pizza for dinner because the whole day is ruined anyway, look at, and celebrate, all the good things you did do.

Maybe you started the day with a big glass of water and remembered to include protein with your breakfast. What about that lunch you brought from home to avoid ordering take out with coworkers? And the five times you took the stairs today? You get the point. It's not what we do one time that determines our health, it's what we consistently do.

Start focusing on the good things you are already doing and I promise, you'll feel motivated to do more.

Get back on track with a free 21-day holiday reset. Join 8 Weeks is All it Takes on Facebook for more information and to follow along.