How eat right and enjoy your food this Thankgiving 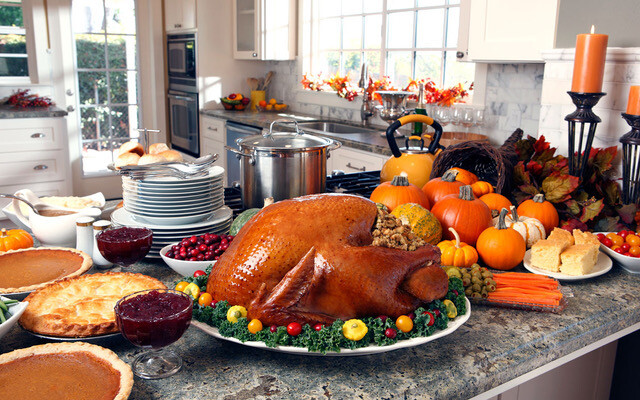 This Thanksgiving, keep your top button done up and burn fat through the holidays when you have second helpings.

I don't know about you, but I'm enjoying fall this year. The colours are stunning, the sun stills shines and last week I was still outside without a jacket. After smoke from the wildfires once again cut our summer short, the blue skies and sunshine combined with the bursts of colour around the city fall are welcome. And, of course, those beautiful autumn colours always bring with it a cornucopia of produce ready to enjoy. Here in the Okanagan, harvest time is always a recipe for something good.

The time between October and February is the time of year where, if a person was going to let his or her health slide resulting in a little (or a lot) of weight gain, it would be here. There are a number of things that factor in and contribute—fewer daylight hours creating a tendency to spend more time indoors with less physical activity; temperatures drop dictating we swap out bathing suits and shorts for bulky sweaters and jeans; and then of course, there are all the holiday meals. I refer to this time of year as the season of food.

October has Thanksgiving and Halloween–both savoury and sweet treat options here. And for all the snow birds flying south, November offers up a second Thanksgiving celebrating with our US friends. November also kickstarts all manner of Christmas parties, and festive gatherings that continue through December and right up until Christmas day brunch, lunch, dinner or, let's face it, some of us partake in all three! Any one or all of these then often get repeated to some degree just one week later as we ring in the New Year. Feeling the urge to undo that top button already?

So with the impending season of food looming upon us, and the helpless feeling of how to stay on track amidst the gravy, candy and pie, while armed with body camouflaging sweat pants, sweaters and boyfriend jeans... well you get the picture. This festive time of year could easily be changed to “feast-ive.” I've even heard people not-so-jokingly comment they're putting on that extra layer for winter. And wardrobe has nothing to do with it.

Then, of course there's a bit of a panic in spring when the sweaters get put away and people start to wonder if they're going to fit into last year's shorts. It can be a very real source of stress for some people— for some, even to the point of foregoing family gatherings to avoid temptation.

And with all the isolation and separation that has happened over the past almost two years, getting together with family, friends and enjoying that atmosphere of joy and thankfulness is a must for mental health.

So, if this has been you in the past, know that you can embrace Thanksgiving and the “feast-ive” season this year.

Fill your cup by supping with those you love, and keep that top button from bursting by having second helpings. Yep, that's right, seconds.

Correct me if I'm wrong, but generally what happens at almost every celebratory dinner, dinner party, holiday feast, or indulgent food-fest of some description, is people head into it like they're never going to eat again. They starve themselves all day, sometimes limit food the day before even, and sit down at the table ravenous and viewing the meal as a challenge.

After all, ya gotta eat to make up for what you sacrificed all day right? Wrong. They load up their plates and power through, often times eating dessert when they're already feeling uncomfortable and had to loosen top buttons and undo belts several mouthfuls ago. Sound familiar?

If you were to approach the meal with the mindset, not that you'll be having less or that you would somehow miss out, but that you get to have this deliciousness twice rather than just once, chances are you'll be less likely to stuff yourself and eat only until satisfied. Have the turkey, protein is a must.

Have the veggies, those are the carbs you want. A spoonful of mash potatoes or stuffing with a little gravy rather than a mountain of potatoes surrounded by a moat of gravy. In choosing smaller amounts of everything you'll come away from the table satisfied, comfortable and with your pants properly fastened.

You'll also be less likely to lose the rest of the day crashed on the couch sleeping off a food coma. Three to four hours later, you'll start to feel hungry again because your body was able to metabolize the amount you put in and not store it as fat. And as we need to fuel our bodies every three to four hours, bring on the second helpings.

By choosing two smaller meals three hours apart, you're effectively using food to stabilize blood sugar and balance hormones. Which in turn keeps your metabolism turned on and burning fat rather than storing it. You can even further refine your results by choosing sweet potatoes over white, steamed veggies and/or salad greens over dinner rolls and stuffing, sweeten your cranberry sauce with stevia rather than sugar, and opt for sparkling water with lemon or lime over alcohol.

The bottom line is always, the better we are at stabilizing blood sugar, the more efficient our bodies become at burning fat. And let's face it, who doesn't want to enjoy holiday meals and burn fat at the same time?

If you're looking for more great recipes, tips and strategies on how to use food to create balance in your body and burn fat, join the 8 Weeks is All it Takes group on Facebook.