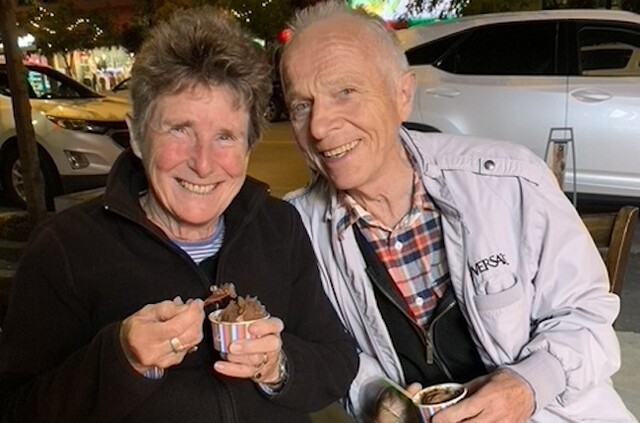 I am blessed to say that I have many things to be thankful for.

God, family, and health are always at the top of my list and despite all the chaos that's happened this year, I am thankful for 2020 as well.

I'm sure a few of you are now questioning the state of my mental health at this point. Even though this year seems to have brought more negatives than positives, 2020 has also provided amazing opportunities to reflect on what's been working in our lives and what's not. Especially in our own personal health.

Typically, people usually only make significant changes in life when something happens to indicate staying where they are would be worse than making that change. As humans are (mostly) creatures of habit and balk at change, it usually has to be something pretty big to set those wheels of change in motion. For my mom, it was cancer.

About 24 years ago, my mom was diagnosed with two different, rapidly growing types of breast cancer. One in each breast. By all accounts my parents led a healthy lifestyle. They don't drink, dad hunted and they had a big garden, they've always been active and neither has ever been overweight.

It just goes to show that:

My mom looked fine on the outside, but clearly she wasn't fine on the inside. And that prompted them to make some changes.

As a kid growing up, I often remember mom telling my sister and I, “Your dad can fix anything.” And she was right. Things around the house and the farm, vehicles and even some things to do with his own personal health.

After working with a naturopath and doing a lot of reading on food, dad was able to bring down his high blood pressure, cholesterol and blood sugar and his doctor never did have to prescribe any medications. So when mom was diagnosed with cancer, dad started researching again.

Mom's a tough, little lady. When she sets her mind to something, you can bet she's going to make it happen. And as mindset does play a role in the outcome of our health – good and bad -  choosing to focus on the positive is key. She's good at that.

The old adage, “What you think about, you'll bring about," has actually been quantified by science. Bruce Lipton's work in epigenetics illustrates it quite well.

My mom went through surgery and treatment, always looking on the bright side, my dad read up on what she should be eating or not eating, how much and when, and learned which supplements would help keep her from getting sick during treatments.

It worked. And because they saw results, even after mom was given a clean bill of health, they kept doing the things that helped to build health and swore off those things that didn't.

As with anything in life, we get out what we put in. And when it comes to health, it really is much like an investment. Most people understand that whether they want to or not, putting away even a small amount of money on a regular basis will get them a good return when it's time to retire.

It's that consistent building on and adding to what was put away the month before that helps your money grow. Same with health.

Doing any good thing(s) for your health is always preferable to not. Adopting them as part of your lifestyle will allow you to experience increased benefits. As opposed to those who simply follow a plan for a short amount of time and stop when they think they're done.

Health is a journey, not a destination. If you stop putting money into your portfolio, you can't expect to see the same amount of money at retirement as you would by contributing regularly. Same with health.

Any time you make a healthy change your body benefits. But if you stop following that healthy plan, don't expect to live with the same level of health you would have created by continuing to invest by doing those things that worked. And food is one of those things.

I find it interesting that even though Hippocrates first said way back in ancient Greece, “Let food be thy medicine and thy medicine be thy food,” little consideration is given in North America to making healthy food changes to:

It's sad that this is often an afterthought rather than forethought.

Common sense would be to build up the body as much as possible ahead of time, especially since we really don't know what's going on inside. The worse thing that could happen is that you won't get to use those company sick days.

Still, no one is perfect and sometimes things do happen. People like to use the example of a marathon runner who's in the best shape of his life and yet has a heart attack at 40.

They ask, “What's the point if it's going to happen anyway?” Rather than saying, “Good thing he was in such great shape or me might have had that heart attack at 30.”

Last week, my mom had surgery to remove a tumour in her pancreas/bile duct. Her surgeon was pleased that they were able to remove it all with no complications and he reported the surgery went better than expected.

Dad and I both agree that had he and mom not been consistent with staying away from the nasties and doing so many good things consistently over the years, it could have been a very different story.

This Thanksgiving, our family has a little more than usual to be thankful for. I am thankful not only that my mom will make a full recovery, but also that she and my dad are once again taking stock, doubling down and committing to doing the best they can for their health.

The Bible says we're meant to live to the ripe old age of 120. Similarly, a 2017 article in Time magazine discussed a paper published in the scientific journal, Nature, which listed 115 as our last year.

Even that was criticized for limiting it by setting a number. By either of those numbers, most of us aren't even halfway there. All the more reason to be thankful and invest in your health.

If you're looking for simple tips and strategies to lose weight, increase energy, reverse disease and take back control of your health, join the 8 Weeks is All it Takes group on Facebook.