Cereal not the best breakfast 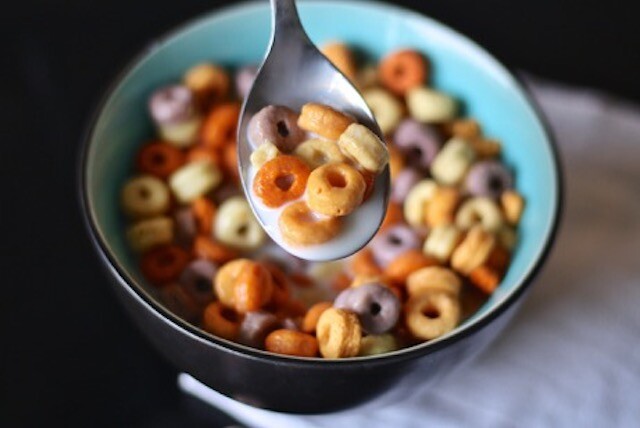 I remember as a kid my mom saying things like, “Breakfast is the most important meal of the day...” and “You've got to get something healthy in you so you can concentrate in school ...”

Of course she was right. I totally agree with both of those statements and remember saying the same things to my kids. What I didn't realize way back then was that some of the foods we were consuming in that very important first meal of the day weren't always as healthy as I thought they were, nor were they balanced.

Cereal. Likely the most popular breakfast food out there. Fast, easy, no cooking required, kids can serve themselves and they like it. So, overall a pretty attractive option when you're in a rush and still have to drop the kids at school and get to work. Besides, it says right on the box, “fortified” and “enriched,” so it's gotta be healthy right? I thought so too. Especially if it had some added protein. But when my youngest daughter ended up with some significant digestive issues and I began to look more closely at what happened when she ate certain foods, and reinforced later as a nutritionist where I was often led me down the rabbit hole of foods vs. “food-like substances,” I very quickly realized that some of those “healthy” breakfasts were not.

There are several things wrong with cereals but the biggie here is sugar. And to truly grasp just how much sugar you might be consuming at breakfast, understanding how to quantify the amount listed on the label into something relatable is key. Take a second to grab that cereal box out of the cupboard, find the number of grams of sugar listed and divide by four. This will give you the teaspoon equivalent. I can almost hear the eyebrows raising. In addition, cereals are highly processed and digest very quickly, heading straight into the blood stream, causing a spike in blood sugar and subsequent fat storage right around the middle. FYI, all highly processed foods – even if they don't have a large number of grams of sugar listed – will convert straight to sugar when you eat them. Add a piece of toast and a glass of OJ with your cereal and blood sugar goes through the roof. For example, one cup of Raisin Bran, one slice of whole wheat toast with a little strawberry jam and a glass of orange juice has a total of 55g of sugar. When you do the math and divide by four, that's almost 14 teaspoons of sugar. Crazy right?

It's things like this that cause people to think carbs are bad. Yes cereal, bread/toast and orange juice are carbs. So are fresh berries, an orange, and a bowl of salad. “But my cereal is enriched with fibre and fortified with iron,” you say. I say fibre, iron and countless other vitamins and minerals are found naturally in whole, fruits and veggie carbs. “But there's sugar in fruit too, right?” Those sugars are natural and the amount is considerably less. That glass of orange juice will have 23g of sugar versus 11g in a whole orange. Not to mention the orange is packed with vitamins A, C, calcium and iron. Unlike the juice, naturally occurring fibre in the whole orange helps slow digestion, avoiding a spike in blood sugar. Not to mention the synthetic vitamins/minerals added along with toxins like glyphosate found in most cereals, but that's another column for another day. Doesn't matter how you look at it, whole foods win over processed every time.

So, let's take a look at what does actually constitute a healthy breakfast. For those who do follow my column, you know that balancing blood sugar is essential to creating balance within the body and creating overall optimal health. In order to do that, we need to balance our macros – having a clean protein, healthy fat and whole, unprocessed carbs together every three to four hours throughout the day. We say PFC every three.

As we've seen, whole foods are always the best choice. Eggs (protein and fat) and a small bowl of oatmeal (carb) or fruit (carb), homemade pancakes/waffles subbing wheat flour for something organic and non-GMO (a blend with quinoa flour in it will give you some protein along with the carbs) and cooked in organic, grass fed butter, coconut oil, or olive oil (fat) are just a few examples that I use. And for those times when you need the kids to be able to get it themselves, or you only have five minutes to get out the door, a PFC protein shake that you can blend up as a smoothie and take with, or simply dump powder into your water bottle and shake in the car will work too. I have my shake first thing in the morning and keep individual servings in Ziplock bags in my car for those errands when I think, “Oh, I'll only be gone 20 minutes.” Anyone else know what I'm talking about here? And as a side note, years ago, I used to work out first and then come home and eat afterwards. By adding in a shake before my workout, then refuelling with a real food meal three hours later, I lost two percent body fat. Without changing anything else. Balance and quality do make a difference.

I invite you to read your labels, do the math and ask yourself if you're fuelling your body with healthy, nutritious food, or simply filling the stomach bucket with sugar and “food-like” substances.

Want to learn how to PFC and create better balance in your health and in your life? Join the 8 Weeks is All it Takes group on Facebook.