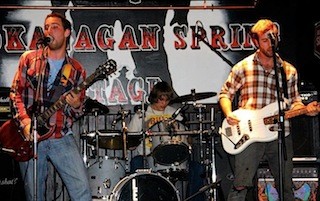 Kelowna band Live on Brighton, currently on tour in Toronto in support of their latest CD “After Hours”, was recently named as a finalist in EMI’s “Moartist” music contest.

Moartist is an ongoing competition from music label EMI and it’s new subdivision; the label has won several marketing awards for it and big plans are in the works for the bands they choose to promote.

The band’s front man Jeff Fero tells Castanet that they were shocked when they got the call revealing them as finalists.

“This contest was one of probably five we had entered that week,” Fero says. “We entered, and almost forgot about it afterward. They told us we were chosen, and even offered to fly us to Toronto for meetings. Funny thing was, we were already there to finish our CD.”

Fero explains that the normal contest process required a certain amount of fan votes, but they were still chosen as finalists despite only having a few votes. “The label was really cool about it; they told us we were finalists but now we’d have to work for it and get fans to vote for us,” he says.

The band, whose name is taken from Kelowna’s own Brighton Road in Rutland, actually met online. Live on Brighton is comprised of Fero on vocals and guitar, Kris Scott on drums and Harrison Crerar on bass. 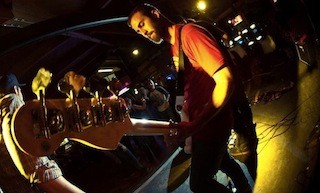 Over the next six weeks, they will be spending their time playing club gigs in Toronto, Montreal and New York. Then, on March 22nd, they’ll be taking part in Canadian Music Week, a huge event for musicians encompassing 450 bands, 60 venues, and big name speakers like Motley Crue’s Nikki Sixx and The Guess Who’s Burton Cummings.

Outside of performing at the various Music Week venues, musicians attend various seminars as well. What can an artist learn there?

“Essentially, they teach you how not to screw up,” Fero quips.

Fero’s somewhat dry sense of humour often creeps into the conversation, and probably doesn’t hurt the band’s sense of style, which is evident in the YouTube video they created for their infectious rock cover of Adele’s Someone Like You.

When the decision had to be made regarding how to sell their just-released CD, iTunes was the obvious choice, but Fero explains that they decided to travel down the path paved by Radiohead and Nine Inch Nails. By choosing to allow the fans to pay whatever they wanted, some downloaded for free but many paid more than the cost of the whole CD on iTunes. “We put it out by donation, but somehow we made more money this way than we have from iTunes. It’s pretty awesome.”

Fero, who attended the Centre for Arts and Technology in Kelowna, developed the skills to record and basically produce the CD himself - then sent it to be mastered. While in Toronto, Live on Brighton is involved in ongoing meetings with heads of A&R (Artists and repertoire) and marketing from the label to help them along with the process.

As they wait to discover their fate for the label’s contest, the band is looking forward to a live radio event in New York City – which has tremendous potential to open a few doors.

“It’s called the Real Radio Show, on the Classic Rock station 103.9 in New York, and it’s broadcast live and then done to a podcast with a huge following. Hopefully it will turn out big for us,” Fero says. “And speaking of radio, our latest single ‘Passenger Seat’ is getting airplay in Calgary and even in Europe."

What are they looking forward to most? “Coming home to Kelowna. We’ve been away for a few months already and won’t be back until April. We came home at Christmas but we can’t wait to be back. We’ll be playing at Doc Willoughby’s for sure, and look for us at the summer music festivals as well,” Fero says.

We’ll be following Live On Brighton’s progress as they do their thing on the East coast, and are looking forward to seeing them back in the Okanagan in the spring.

Here’s another song from the band, an original tune called Roll With You.