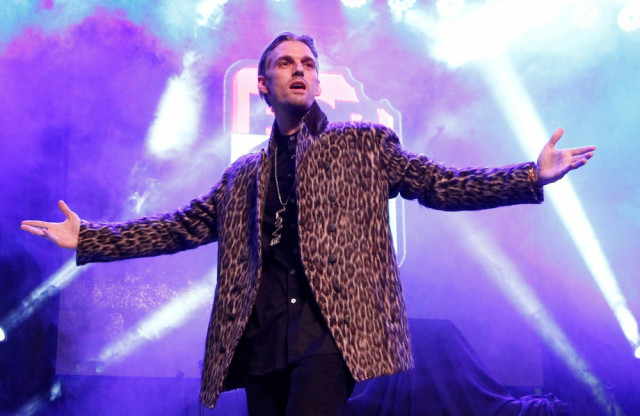 Police carried out a welfare check on Aaron Carter after receiving calls from worried fans.

The 'Crazy Little Party Girl' hitmaker went live on Instagram last Tuesday (20.09.22) to catch up with his followres but at one point, the screen went black and some viewers thought they could hear spraying and inhaling in the background.

Cops and the fire department then made a call to the 34-year-old star's home but no one amswered the door. They eventually made contact and Aaron told officers he'd been sleeping.

Police found no criminal activity or signs or drugs or suicide attempts.

According to insiders, Aaron's followers used to frequently call police with their concerns, and his recent online antics had caused further alarm.

The troubled singer later claimed it had all been a joke, branding himself "the troll hunter" while spraying what appeared to be an air freshener.

And he said: "I’m tired of people coming after me so I trolled everybody."

Aaron recently insisted he has been sober for five-years but has been undergoing outpatient treatment at rehab facility Lionrock Recovery as part of his and on/off partner Melanie Martin's attempts to regain custody of their 10-month-old son Prince, who is currently being cared for by Melanie's mother.

He said: “I haven’t had any relapses or anything like that, it’s just triggers are big right now for me [and] I want my son back.”

It’s the fifth time Aaron has been in treatment, and detailing his past drug use, he admitted he has “f****** up” his mind by “huffing duster cans and suffering over 100 seizures”.

Aaron added: “I have a medicinal marijuana license to grow up to 99 plants a year. But I threw away all that gear, I sold all of it, got rid of all my plants and my strains I was growing.

“And I was never even told I had to do that by DCFS (Department of Children and Family Services) or by the State of California.'