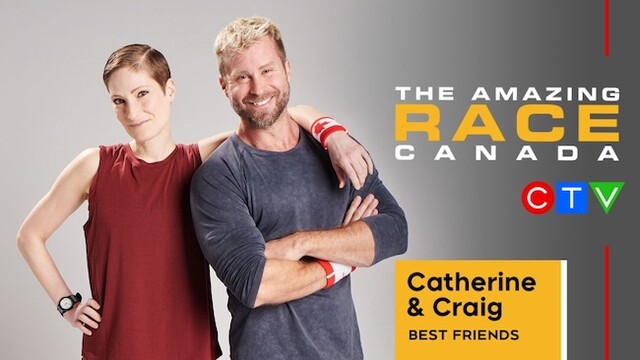 Catherine Wreford and Craig Ramsay had already experienced a hurdle more difficult than any reality show challenge by the time the friends of 25 years appeared on Season 8 of “The Amazing Race Canada.”

When the 49-year-old, Winnipeg-born Wreford was diagnosed in 2013 with anaplastic astrocytoma, a malignant brain tumour, she was informed that she would have anywhere between two and six years left to live.

“I wanted to show everybody that has something that is an obstacle that they can get through it,” says Wreford during a phone interview. “They, too, can muster up the courage to take down the walls that are in front of them.”

Ramsay, 46, from Windsor, Ont., who stood at her side before and after the race, felt very much the same way.

“Our reasoning for doing the race itself was because Catherine had a potentially limited time here,” says Ramsay. “She’s inspired people throughout her whole life, and even more so now, I wanted longevity in this race to showcase as much of Catherine’s story as possible.”

On Tuesday, Wreford and Ramsay were declared winners on CTV's northern edition of the reality show, in which 10 teams race across Canada, completing a mighty catalogue of challenges in pursuit of a $250,000 cash prize and two Chevrolet Silverado ZR2s.

“I'm 45 years old. Collectively, Wreford and I have ages that far surpass any of the previous winners,” says Ramsay, who first met Wreford at the Royal Winnipeg Ballet School.

“With the 'Amazing Race,' it was an opportunity to step in and show what support for a friend going through a terrible diagnosis is and often looks like.”

Both contestants needed to bring a unique bag of tricks to win it all amid some stiff competition. Aside from the fitness expert prowess of Ramsay, who is also an author, TV personality and staunch, outspoken member of the LGBTQ community, he says he has a photographic memory. Wreford added her important skill set of a mathematician and former nursing school student.

This season, all 10 teams began in Mont-Tremblant, Que., and headed to 24 cities with over 20,000 kilometres in travel from coast to coast.

For the past half-decade, this geographical lineup and many like it have defined the long-running series built on the appeal of the great outdoors. But as Season 8 played on, showrunner Mark Lysakowski, like many working in the film and TV industry, felt the difficult challenges that the COVID-19 pandemic suddenly presented.

“It was a very stressful time for me as a television producer,” says Lysakowski, who encountered numerous delays from the originally planned 2020 première of the series, which faced an extra postponement in 2021 before debuting in 2022. He also saw contestants such as Wreford and Ramsay temporarily bow out due to positive tests of their own.

“I had to put things into perspective. This was just a television show next to the people who were losing their lives around the world,” adds Lysakowski, who understandably prioritized the stoppage of a viral spread over the worry of lower ratings during production lags.

As a result, the three previously COVID-positive teams that included Wreford and Ramsay were given the opportunity to return to the race.

"We were overjoyed with being invited to return when the 2020 pandemic hit, but it was terrifying for us," says Ramsay. "We would never want any of the teams in the future to ever have to go through what we did."

In the mind of Lysakowski, the challenges posed by COVID-19 still didn't deter the show from going on to reward two people whom he views as the embodiment of the competition and a difficult period.

“Catherine’s story is filled with emotion because as she says, she’s past her expiration date,” says Lysakowski. “It’s her resilience as a human being, but her ability to go through this adventure and tell her story that gives people hope and something to wish for.”

The winning team used Wreford's story as motivation to keep moving throughout the competition.

“To have those years of struggle and to have the opportunity to revisit this goal of ours as best friends was worth it,” says Ramsay. “We hope Canadians look at this and take this opportunity to connect with their friends and make special memories together.”

Like with many things that Ramsay says, Wreford tends to agree.

“This competition was all about trust. I trust him 100 per cent and I know he trusts me,” she adds. “When you have that, the world's your oyster."