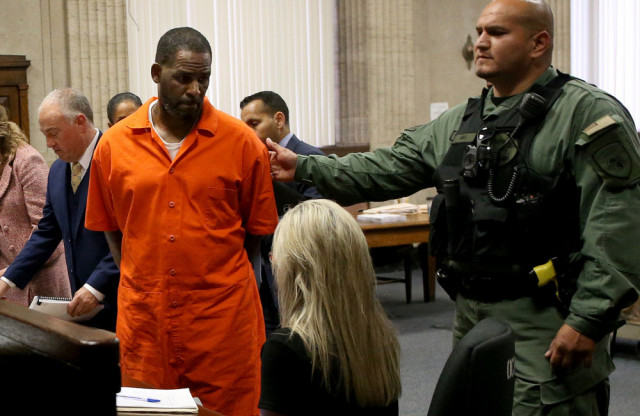 The girl is allegedly seen in multiple child pornography tapes from the late 1990s having sex with the disgraced 1990s R and B sensation.

She is expected to be the prosecution’s star witness in ‘I Believe I Can Fly’ singer Kelly’s trial on allegations he made child pornography and enticed underage girls for sex.

The singer is accused of having sex with the girl when she was 14 and she allegedly recorded some of their hundreds of sexual encounters.

Kelly is said to have threatened and paid off the girl and allegedly videotaped himself having sex with her when he was about 30.

The tapes showing the alleged encounters were part of a 2008 Illinois child pornography trial in which Kelly was acquitted after the witness declined to take the stand.

Now nearly 40 years old, she is finally expected to testify, using the pseudonym ‘Jane’, said Assistant US Attorney Jason Julien during his opening statement on Wednesday. (17.08.22)

Prosecutors added Kelly’s latest federal trial in Chicago is about his “dark” and “hidden” side.

He added Kelly had sex with “multiple girls, hundreds of times”.

Mr Julien also said Kelly’s music career belonged to his “public side, before saying the singer had “another side – a hidden side, a dark side”.

He added: “This trial is about Kelly's hidden side.”

Kelly was sentenced to 30 years in prison in June for using his fame to sexually abuse young fans.

He was recently removed from suicide watch at a Brooklyn jail and faces four counts of enticement of minors for sex, one each for four other accusers.

The Kelly associates are Derrel McDavid and Milton Brown, and are co-defendants at the Chicago trial.

McDavid is accused of helping Kelly fix the 2008 trial, while Brown is charged with receiving child pornography.

Like Kelly, they have denied wrongdoing, and are expected to give evidence.

Kelly’s lead lawyer Jennifer Bonjean urged the jury to reject the prosecution’s portrayal of the singer.

She said: “When the government wants to paint him as a monster, remember we are talking about a human being.”

Ms Bonjean also warned jurors about what she described as a “mob justice climate” surrounding the case, referring to the six-part documentary ‘Surviving R Kelly’ and social media posts about his behaviour.