Gene Simmons: KISS will carry on in some form

Simmons: KISS will carry on 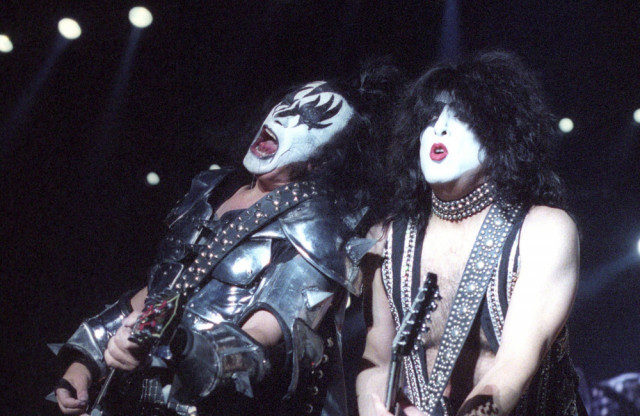 Gene Simmons has insisted KISS will "continue" beyond touring.

The 'Rock and Roll All Nite' group are planning to bow out of live gigs after their ‘End of the Road’ farewell tour - which keeps getting extended - meets its conclusion.

However, the 72-year-old rocker says KISS will still stick around in some form and do things he hasn't "even thought of", hinting at a musical show about the 'Crazy Crazy Nights' hitmakers.

Speaking on Dean Delray’s' Let There Be Talk' podcast, he said: “KISS the touring band will stop. But the touring band. KISS will continue in other ways. I have no problems with four deserving 20-year-olds sticking the makeup back on and hiding their identity.”

He added: “KISS will continue in ways that even I haven’t thought of.

“But I can conceive of… You know, the 'Blue Man Group' and 'Phantom Of The Opera' tours around the world with different personnel.

“There could and should be a KISS show, kind of live on stage with effects and everything else, but also semi-autobiographical thing about four knuckleheads off the streets of New York that ends with the last third as a full-blown celebration, a full-on performance. Not with us. Although not a problem stepping in every once in a while.”

As as well as wrapping up the tour and a number of festival dates, Gene previously said the band plans to reschedule their postponed Las Vegas residency, which was due to kick off at Sin City's Zappos Theater in December 2021.

"Our original plan was to come in just before New Year's, but it was just too busy.

"When I came into town and joined my friend Dave Grohl onstage [on December 4], that same night you could see George Strait at T-Mobile Arena, literally across the street. You go down the street and you can see many more artists. I mean, it's packed. There are more artists per square inch in a city that never sleeps than anyplace on the planet."

On when it could take place, he said: "In a year, maybe half a year. With all due respect to other all the other artists who are terrific, and who are great and iconic, we'd rather wait for the traffic to die down and bring the best show on Earth, period."

Gene previously admitted it was time for the group to hang up their makeup kits as there is nothing worse for fans than watching their idols grow too old to perform to the fullest on stage.

The glam metal rockers - also comprising Paul Stanley, 70, Eric Singer, 64, and Tommy Thayer, 61 – said in 2018 that they would stage a massive farewell tour, before hanging up their stage personas.