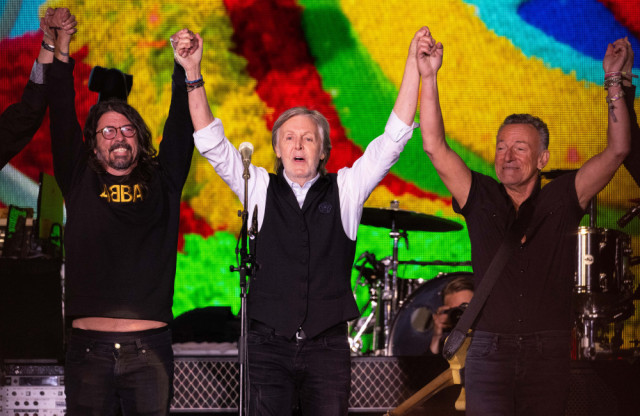 Sir Paul McCartney is facing controversy for showing a clip of Johnny Depp during his history making Glastonbury Festival set.

The former Beatle, 80, showed the actor, 59, using sign language on a giant screen behind him as McCartney sung the track ‘My Valentine’ that went with the music video.

Depp, fresh from wining his defamation trial victory against ex-wife Amber Heard, 36, appeared in the 2012 video alongside actress Natalie Portman.

The clip featured Portman, 41, lip syncing to the music while Depp strummed an acoustic guitar, with the images also shown by the BBC in their coverage of the Worthy Farm festival.

It comes after McCartney – who made history on Saturday night (25.06.22) as the oldest solo performer to headline Glastonbury – used the footage in his recent US ‘Get Back’ tour, while ‘Pirates Of The Caribbean’ actor Depp was in the midst of his six-week defamation trial against Heard.

The rocker did not address Depp or his court case victory during his Glastonbury set, but the crowd erupted in cheers as soon as the actor appeared on screen.

Fans are now flooding social media to share mixed reactions to the playing of the clip.

Some say they were disappointed he appeared to be backing the actor, while others sided with Heard in her court fight against Depp.

But many others insist they loved seeing Depp during McCartney’s set.

One person wrote: “Deeply disappointed in both Paul McCartney and Glastonbury for the Johnny Depp video. Feel like it goes against everything Glastonbury stands for.”

Another hit out: “Not the cleverest thing to do. Paul – such a contentious judgement and a great way to alienate those who are not comfortable with the trial outcome.”

But one of his many supporters said: “To see Paul McCartney showing support for Johnny Depp at Glastonbury was brilliant. Well done to everyone involved.”

McCartney, who last week celebrated his 80th birthday, was joined at his Glastonbury appearance by Dave Grohl, 53, and 72-year-old Bruce Springsteen.

He also performed a duet with his late bandmate John Lennon on The Beatles’ 1970 single ‘I’ve Got A Feeling’ thanks to technology from  director Peter Jackson, and waved the Ukraine flag in a show of solidarity with the war ravaged nation.

McCartney’s use of the clip of Depp comes after Heard admitted she can't afford the damages awarded in the case during an interview last week with ‘Dateline’.

Heard was ordered to pay Depp $10 million in compensatory damages and $5 million  in punitive damages.

The second payment was reduced to $350,000by the judge, while Heard was awarded $2 million in compensatory damages – meaning Depp walked away from the case with the ‘Aquaman’ actress owing him $8.35 million.